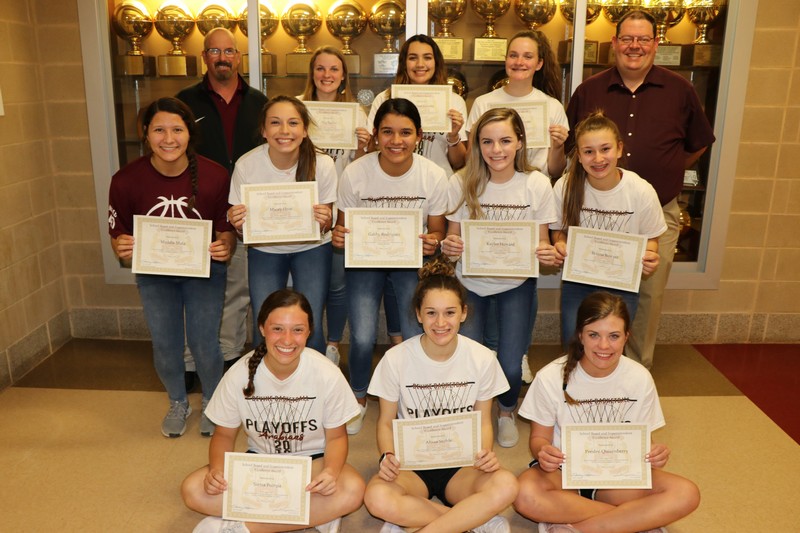 We are super proud of the accomplishments of the girls this season. We were honored with three superlatives. Preslee Quisenberry was named MVP of the district for the second year in a row. Preslee was the driving factor for our team. Not only was she our top scorer but she also got us into our offense and set up when we had to handle pressure. She was a super smart player who made other people around her better. She really made us the team that we were this season. Super proud of her and excited that the district recognized her as MVP. I was very excited that the district recognized Alissa Stehle as our Defensive MVP. Alissa took this role to heart as she was always guarding the opposing team’s best guard. Alissa knew her value to the team on the defensive end and that is not always easy to get kids to buy into. Alissa took that role and excelled at it.. Macey Hein was selected as the New Comer of the Year in the district. She made a big impact for us in district games with her ability to score and to guard on the perimeter. She provided a spark to us on several occasions with steals and lay-ups. It was nice to see her receive this honor as well.
Sierra Pompa and Megan Runyan were selected as First team All-District players. These two girls made a huge impact on the floor for us. Sierra was a threat to score inside and she did a great job of rebounding this season. She also was able to guard both inside and outside for us this season. Megan moved positions from guard to post and once she got comfortable in her role she became a big rebounder and scorer for us. She scored in multiple ways for us and her length made an impact on defense as well. I was very happy to see these girls recognized for their efforts.
Maddie Mata was selected as a Second Team All-District player this season. Maddie was our 6th man off the bench and really improved this season. She came on to be a scorer for us late in the year. I was super excited to see Maddie get this honor.
Clarissa Zamora and Ally Taylor were selected as Honorable Mention All-District as well. These two kids did a great job of filling a role for us off the bench this season.
All of the kids were selected as Academic All-District. I am super excited about that as well. It shows that these kids performed well on the court AND equally as well in the classroom. Academic All District: Alissa Stehle, Sierra Pompa, Macey Hein, Preslee Quisenberry, Kaylee Howard, Megan Runyan, Gabby Rodriguez, Clarissa Zamora, Ally Taylor, and Maddie Mata.
Coach Jim Sessions
Head Basketball