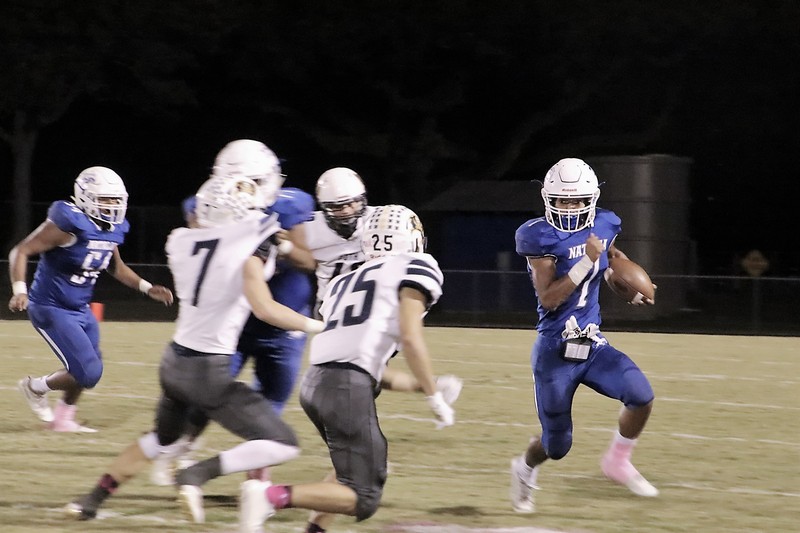 Offensive production by the Natalia Mustangs was not missing last Friday night at Mustang Stadium versus district favorite Poth. What was lacking, was the ability to finish drives, the ability to hold onto the football and the ability to stay on assignment and slow down two talented and speedy Poth Pirates.
As a result, the Mustangs found themselves down 35-0 at the half before eventually falling to the Wilson County squad 48-20.
“Poth is a talented football team and we knew we had to play our best game if we were going to have a shot,” Coach Ilyan Martinez said. “We didn’t do that and they took advantage of those miscues on our part.”
The Mustangs won the toss and deferred to the second half of the game. Poth received and they only needed three plays to get on the board. Poth scored on a Cooper Conn 43 yard run by Cooper Conn. Conn was one of three Poth Pirates to finish the game with over 100 yards rushing (6-126-2TDs).
Natalia got the ball and started their first drive at their own 22 yard line. Natalia used a 19 play drive that marched down to the Poth 6 yard line where the Stangs had 1st and 5 at their 6. Unfortunately, on the ensuring play, Natalia lost seven yards before watching the next play lose 8 yards. Natalia gained 10 yards on a Woodson pass to Vasquez on 3rd and 19 from the Poth 19 resulting in a 4th and 9 at the 9. Natalia opted for a field goal attempt, but it was blocked giving the Pirates back the football.
Poth needed just seven plays, for QB Kolton James to find his go to man Drew Arevalos for a 21 yard touchdown giving the Pirates a 14-0 lead with 1:00 to go in the 1st quarter.
Although the Mustangs had a number of chances to make this a game in the first half, they really shot themselves in the foot. As a result, Poth scored three times in the 2nd quarter thanks to an Arevalos 14 yard run, an Arevalos 2 yard run and a Conn 63 yard run giving them a 35-0 edge at the half.
It was a defensive battle in the 3rd quarter, as neither team gave up a touchdown.
Natalia got on the board as they began a drive at their own 27 yard line with 3:55 to go in the 3rd. They used a combo of Woodson passes to receivers such as Evy Curiel and Xavier Vasquez as well as runs by Jimmy Ray Gutierrez and Woodson. This led to a one yard touchdown run by Woodson on a 3rd and 1 at the Poth 1 with 11:57 to go in the 4th.
Poth struck back, with back-to-back scores thanks to a Arevalos 8 yard run with 8:04 to go before watching James connect with Freddy Amaro with 6:41 to go giving the Pirates the 48-7 lead on Natalia.
Natalia finished strong with two complete drives. Natalia used a 4 play drive which included a Woodson-Vasquez connection, a Jacob Jass 3 yard run and a Woodson 5 yard run to set up their second score of the game. This came on a hard fought run by Jass as he fended off runners en route to a 45 yard score with 3:53 to go in the game.
Natalia was able to stop Poth on the ensuing drive, giving the Mustangs the ball back at the Poth 38 yard line.
The Stangs used six plays to score on a Woodson 15 yard run to give the Stangs their final points of the contest.
Unfortunately, it was not enough as the Pirates defeated the Mustangs 48-20. One thing that was a big contributor to the loss was the fact Natalia had two costly turnovers.
“Turnovers are never a good thing, but when you turn the ball over to a team like Poth, they make you pay,” Martinez said. “We need to continue to improve on protecting the ball and that will be a focus going into this week.”
The Mustangs did account for 356 yards of offense on 79 plays which included 145 yards passing and 211 rushing. Natalia also had 22 1st downs compared to 20 by the Pirates. Poth of course, had a huge night offensively, as they had 496 yards on offense which is by far the most Natalia has given up this season.
“Defensively, we made way too many fundamental errors to be successful,” Martinez said. “We were out of position, had missed tackles against two really talented backs and that led to a ton of yards and points. It is frustrating, because I feel like for most of the year, we have been good in those areas. To not be great at it against a really good team is disappointing, before I know what our kids are capable of.”
As mentioned, Natalia had a great night statistically on offense and Coach Martinez was asked what is holding this squad back when it comes to points and finishing drives.
“We are lacking the consistency to be successful in every phase of the game,” Martinez said. “Confidence is only going to be built through experience and I feel like we are getting better each week. We just have to keep playing and getting better. I know we are headed in the right direction and I have full confidence in our kids and coaches.”
Individual Stats: Rushing: Woodson 23-108-2TDs, Jass 5-64,-1TD, Gutierrez 17-45. Passing: Woodson 16-31-145-1INT. Receiving: Vasquez 8-57, Curiel 3-43, Contreras 3-32.
Defensive Leaders: Isaac Martinez 10 assists, 4 solo tackles; Michael Martinez 4 assists, 5 solo; Matthew Manka 6 assists, 1 solo; Demetre Perez 3 assists, 2 solo; Xavier Vasquez 2 assists, 3 solo and Matthew Contreras 1 interception.
Natalia will travel to Nixon this coming Friday for a must win, if they have hopes of making the 2018 Texas High School Football Playoffs. See the Nixon-Smiley preview story for more details.
By Eric Smith