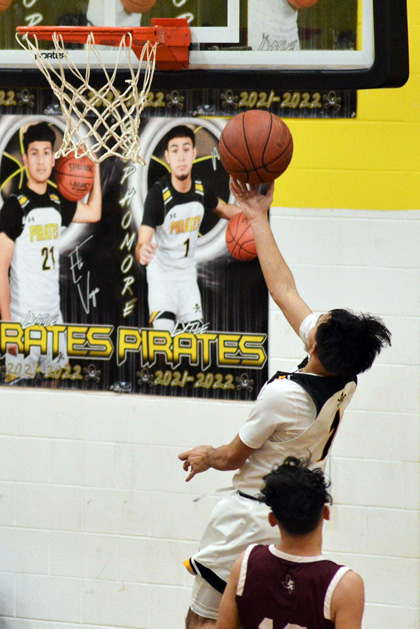 Playing the Poteet Aggies on Tuesday night, the Pirates also honored their parents on Parents’ Night. Now 10-1 in district, Lytle sits behind the undefeated Poth Pirates. Lytle faced Cotulla last night on the road. This Friday they will play Poth in Lytle!
The tip off went to Poteet but the first points went to Lytle from Damien Garcia. The Pirates would be up by 8 before the Aggies could get on the board. At 10-2, Lytle’s Malakai Castro stole the ball and took it all the way down court for the lay-up; he followed it with a three-pointer a few moments later. After a time out, Lytle’s #25 grabbed a Poteet pass and made a basket. Next play Castro did the exact same thing and put Lytle up 24-8.
Starting the quarter up 24-9, Poteet continued to not press and just hold their zone. Lytle maintained their full-court press and used every opportunity to strip the ball from Poteet. Jordan Balderaz grabbed the rebound and sank the basket for the first points of the quarter. The Pirates found themselves in foul trouble with five minutes left in the half. Balderaz scored the next four points and kept the lead growing. Now up 36-20, with 20 seconds left, Lytle ran out the clock to end the half.
The Aggies scored first in the third but Castro drove down court for the lay-up. Matt Sanchez inbounded the ball over all of the players heads to Castro for a long three-pointer, 43-22. Sanchez knocked a bad pass out of the Aggies possession and then after taking it down court he passed to Castro for the basket. In the last two minutes of the quarter, Lytle did not score to end the third 53-30.
Lytle ended their scoreless run in the first minute with a three-pointer from Castro. A technical was called on a Pirate when he was unhappy with the referee’s call. Now with 9 team fouls, Lytle needed to watch their fouling but with the referees calling it tight that would be hard. Leading 62-44, Lytle found themselves playing a more aggressive Poteet team. Jose Cortez scored the three-pointer off the inbounding play. Two minutes left with a lead of 20 points, Balderaz was fouled shooting under the basket. Making both shots, he was back at the line for 1-1. Lytle’s #25 sank two free-throws and with under a minute left, Damian Garcia stole the ball and passed to Eli Vega for the lay-up. The Pirates would win the game 71-45 for their 10th district win.
By Dicy Chambers
Sports Writer