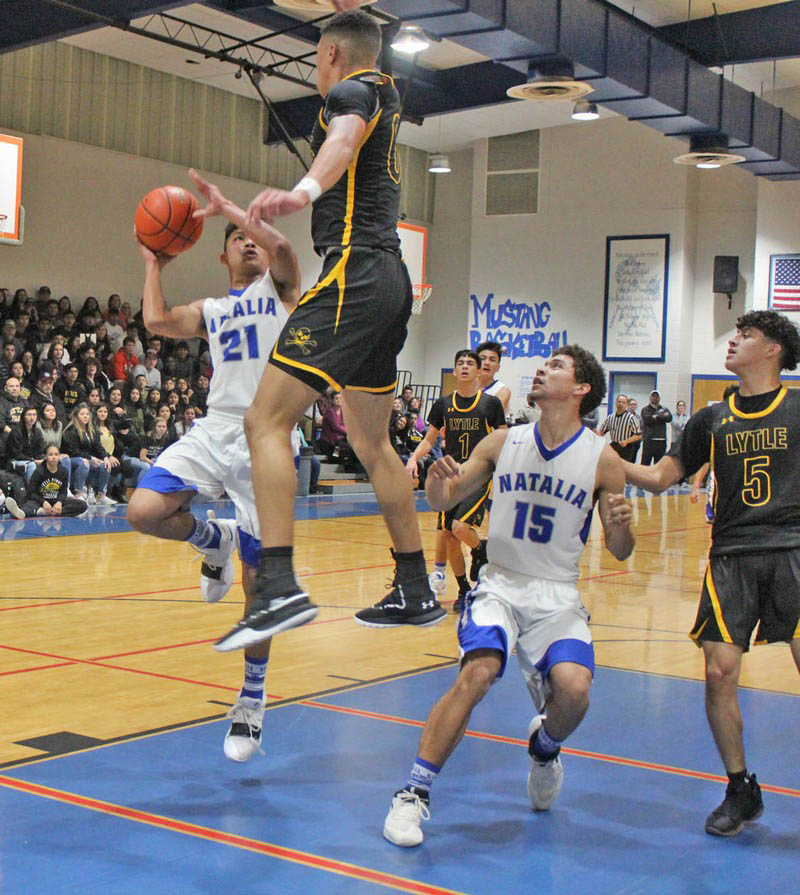 A standing room only record crowd was on hand at the Natalia High School Gym last week for the first district meeting between Natalia and Lytle (21-1, 3-0) since the mid 1990s. A rowdy atmosphere made for an exciting game from start to finish, as the Natalia Mustangs made the best of the energy keeping things close throughout the 1st quarter of action.
“Coming into the Lytle game, we knew we were going to have our hands full,” Coach Justin Welsh said. “Lytle is an extremely talented team and they have four to five guys who can score at will.”
Natalia was able to work off of missed shots by Lytle and great rebounding in the opening quarter resulting in an 11-point effort. Four total Stangs contributed offensively, as Juelian Armenadriz and Xavier Vasquez led the way scoring four points each in the quarter.
Unfortunately, Holgain began to heat up for the black and gold, as he nailed three balls from downtown leading the Pirates to an 18-point opening quarter.
The black and gold began to use their size and speed to their advantage, as they outscored the Mustangs 25-13 in the 2nd quarter. 13 of the 25 points for Lytle came from their big man Cruzzi allowing the Pirates to take a 43-26 lead into the half.
Lytle put the game away in the 3rd quarter, as they outscored Natalia 23-10 as Jared Stallworth accounted for six of ten for Natalia and Martinez accounted for ten of twenty-three for Lytle.
In the 4th, the Stangs held the edge 20-16 offensively, but it was not enough as Lytle picked up a solid 82-56 win over the Mustangs keeping their impressive season rolling in the right direction in 30-3A.
“I was proud of our effort defensively,” Welsh said. “We gave up more points than we would have liked to, but I felt like we made them work for a lot of what they got. We got back into transition and did not allow a lot of easy buckets.”
Scoring Leaders Natalia: Matt Contreras 12, Armendariz 9, Jimmy Ray Gutierrez 9, Stallworth 8.
Scoring Leaders Lytle: Cruzzi 22, Holgain 19,Ybarra 17, Martinez 15.
“Offensively, we played one of our better games of the season, but costly turnovers were magnified against a team like Lytle,” Welsh said.
Coach Welsh was asked about the atmosphere which was one of a kind and not something locals have seen since possibly the 2009 Natalia-Freer District Title game: “The energy in the gym was electric and something I have never experienced before. I am proud of how our kids held their composure.”
By Eric Smith