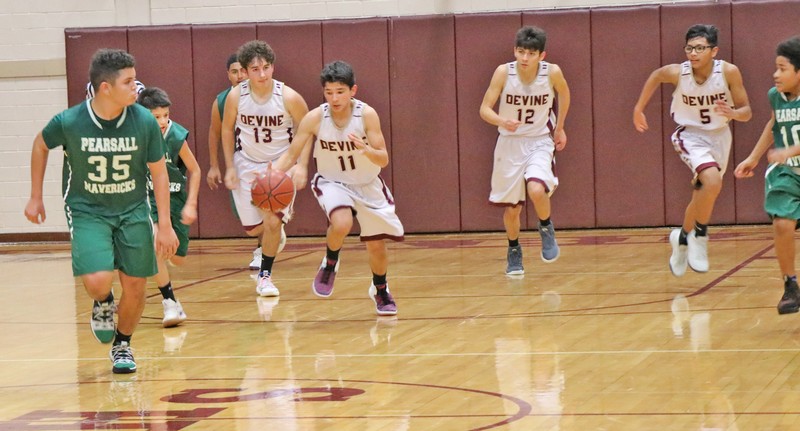 In their first district game of the season, the Freshman Warhorses lost to Crystal City, 38-46.Down by only 2 at the end of the first quarter, the Warhorses were playing aggressively trying to keep up with the Javelinas. They fell behind in the second quarter and ended the half 17-27. In the third quarter, the Freshmen regained that ground and closed the lead to just 5 points however in the last quarter, the Javelinas were able to take control of the game and won. The final score was 38-46.
“At Crystal City is always a hard place to play, and that was the case on Friday. We got out to a hot start in the first quarter but couldn’t sustain it as Crystal made their run. Robbie Elizondo and Brian Schaefer provided much of the offensive punch with Chris Ortiz and Peyton Carr contributing also. Although we have lost two in a row, our spirits and expectations are still high. We are still on track for securing a winning season and a district championship. We just have to go and take it!” stated Coach Quenton Sanders.
Brian Schaefer led with 12 points, Robert Elizondo 9, Chris Ortiz and Peyton Carr with 8 each and Sage Cruz 1.
The Freshman Warhorses will face Carrizo Springs on the road Friday night and then host Crystal City Tuesday.
By Dicy Chambers
Sports Writer