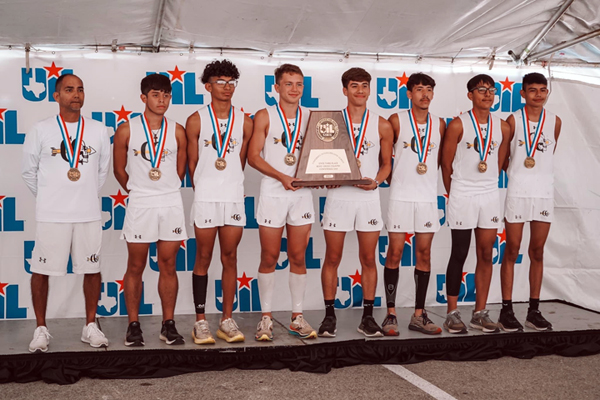 Lytle laid its claim to one of the top programs in the state as the Pirates placed third as a team in Round Rock at the State Meet last Friday morning. In some pre-State previews, Lytle was not considered a real threat to take the medal stand at the conclusion of the 5K race; however those “experts” did not know the heart and determination that this group of seven runners would demonstrate in the season’s final race.
“The boys and coaches felt slighted by the pre-meet predictions,” assistant coach Hadley Foster said. “The pundits had mentioned Whitesboro, Eustace, Crane, Presidio, and three other schools and yet Lytle was not mentioned. We arrived at Round Rock with our fourth straight trip to the State meet and in 2018 had stood on the medal stand as the third best team yet we seemed an unknown. Yes, we had not run the entire seven until the regional meet. Yes we had overcome many injuries but we still felt unknown. ”
Could the “pundits” have been any more wrong?
Lytle tallied 119 points for their third place total, finishing behind champion Whitesboro who had 62 and Eustace who had 91. Region 4-3A champion Brownsville Frontier College Prep was not involved in taking the post-race medal stand as they came in fourth with 156 points, thirty-seven points behind the Pirates.
This is the third time Lytle has medaled at State. The Pirates medaled in 2009, 2018, and now in 2021.
Jose Cortez placed 18th of the 151 runners that began the 3A race. Cortez ran 16:46.9 to edge out the 19th place finisher by less than one-second.
Robert Wagner was 24th overall with a time of 16:54. Wagner crossed the line just .7 seconds ahead of 25th place.
Israel Andrade came in 34th place. Andrade ran 17:09.8 to beat his next closest competitor by more than two-seconds.
Abel Sanchez was 73rd. Sanchez’s 17:51.0 out-competed 74th place by .1 seconds.
Brandon Obando was neck-and-neck with Sanchez and the other runner to come in 75th. Obando ran 17:01.7, the same official time as the 76th place finisher.
Jared Aguinaga placed 86th with an 18:00.01. Aguinaga beat the 87th runner by a little more than one-second.
Johnny Rey Alvarez was the last Pirate runner to cross the finish line. He is also the only freshman on the team. Alvarez placed 93rd with a time of 18:09.7.
“Unlike the girls who had only one runner compete on the course, six of the boys had competed on the course during their careers in Lytle and the only one who hadn’t was our freshman, Johnny Rey Alvarez,” Foster said in closing.
Cotton or medal?
“It is one thing to get to the state meet but it is something else to return with a medal and plaque that is always there as a reminder of the work you put in to accomplish the goal,” Foster said looking back on the day’s events. “Robert and Israel were talking after breakfast about a T-shirt souvenir to bring back, but I told them a medal is a much better souvenir to return with.”

Foster’s kids
Coach Foster coached two of the three senior Pirate runners when they were just getting started in Lytle’s middle school Cross Country program. Jared Aguinaga and Jose Cortez began their careers as seventh graders while Israel Andrade began running as a high schooler.
Foster shared the following bits of information on three members who were vital to the Pirates successes over the past several years:
“Jared placed 10th and was the only medalist his seventh grade year on a 4th place district team. It is the only time he has not run on a district championship team. He placed second in district as an 8th grader to help that team to its first of five straight district titles.
Jose Cortez ended his seventh grade year finishing 22nd in the district race at Crystal City with a time of 15:44. In 8th grade he was also part of a district championship team and since that time, Jose has never failed to be on a district championship team.
Jose leaves Lytle CC with two bronze medals from the state race as he medaled his freshman year in 2018 and again this year. He was second in the Regional race as a team his freshman and senior year and was part of the back-to-back regional championship years in ‘19 and ‘20. This year he placed in the top ten for an individual medal with a seventh place finish.
Israel didn’t begin running until his high school years. He admitted during a talk with the team that running was hard this year because of the work he needed to do and the schooling.
I challenged him at the beginning of the year that it would be amazing to see what he could do if he committed himself to a complete year of Cross Country. He did not disappoint, finishing his last race at 17:09 and being the third runner of the team to cross the finish line.
I feel many of the others ran for Israel to get him a medal.
As we close the 2021 season first we would like to congratulate all the runners this year who put on the singlet for Lytle. Each of these runners played a part in the success of the Varsity. We are needing to replace three seniors this year.”
Team rank
1 Whitesboro 62, 2 Eustace 91, 3 Lytle 119, 4 Brownsville Frontier College Prep 156, 5 Tuscola Jim Ned 158, 6 McGregor 190, 7 Presidio 203, 8 Vanderbilt Industrial 254, 9 San Antonio Cole 260, 10 Boling 266, 11 Boyd 280, 12 Cameron Yoe 283, 13 Crane 285, 14 Amarillo River Road 289, 15 Commerce 304, 16 Valley View 359.
Top 10 individual
1 Wyatt Hoover-Poth 15:57.4, 2 Angel Torres-Tornillo 15:57.4, 3 Crawford Kiser-Amarillo River Road 16:00, 4 Noah Richardson-Boyd 16:20, 5 Chris Saling-Tuscola Jim Ned 16:21, 6 Taylor Gonzales-Whitesboro 16:22, 7 Carlos Lyva-Bishop 16:28, 8 Eduardo Flores-Presidio 16:31, 9 Hutton Edney-New Waverley 16:33, 10 Andrew Hicks-Eastland 16:34.
Pirates
18 Jose Cortez 16:46.9, 24 Robert Wagner 16:54.0, 34 Israel Andrade 17:09.8, 73 Abel Sanchez 17:51.0, 75 Brandon Obando 17:51.7, 86 Jared Aguinaga 18:00.1, 93 Johnny Rey Alvarez 18:09.7.
By Jerel Beaty
Staff Writer