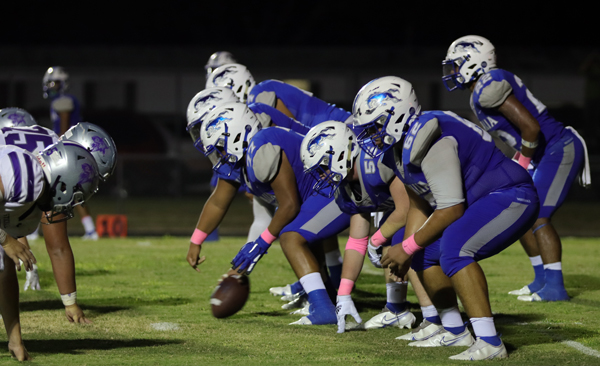 The Natalia Mustangs (7-3) will battle the Taft Greyhounds (8-2) this coming Thursday, November 11th on Veterans Day in a Class 3A, Division II Bi-District Playoff in Three Rivers. This is believed to be the first ever battle between the two programs which are 140 miles apart. Coach Ilyan Martinez and the Natalia Mustangs are asking their fans to make the trip to Live Oak County and cheer on the boys in blue as they are playoff bound for the 4th time in the last five seasons.
“I feel very fortunate I have been here with some really good players and coaches over the years,” Natalia Head Coach Ilyan Martinez said when asked about being playoff bound once again. “I am proud to be a part of this program and this community.”
Taft Greyhound Outlook
The Taft Greyhounds finished as the 3rd seed in 16-3A (Div.II) with an overall record of -2 and a district mark of 4-2.This marks the second year in a row the Hounds are playoff bound. They returned six starters back on both sides of the football from their squad that finished 8-4 a season ago and as Area Finalist. The Hounds are led by Head Coach J.R. Castellano as he is in his 3rd season at the helm of the San Patricio County squad.
“Taft is a very good football team,” Coach Martinez said. “They are well coached and play with a ton of toughness. Coach Castellano and his staff have done a great job and they are a few plays away from being 10-0.”
The Hounds have the following results from their season thus far: 45-7 win vs. Woodsboro, 39-28 win vs. West Oso, 48-6 win vs. Freer, 35-7 win vs. Kenedy, 35-28 loss in the district opener vs. 2nd seed Hebbronville, 28-7 loss to district Champion Odem, 30-6 win vs. Santa Rosa, 20-13 win vs. Banquete, 48-0 win vs. Monte Alto and a 46-21 win vs. Skidmore-Tynan.
“Taft is a spread football team and their offense revolves around their sophomore 6’2″ QB #5 Johnny Acosta II,” Martinez said. “He is special and we will have our hands full trying to slow him down and contain him.” Acosta also plays safety on defense for the Hounds.
This young man has put up very impressive numbers so far this season. He is 134-206-2,186-22TDs with only 5 INTs on the season. ON the ground, he has also rushed 103-878-8TDs on the season. When he throws the ball, his go to man is #1 Ozuna who has 34 receptions for 624 yards and 6 touchdowns as well as #11 Rodriguez who had 32 catches for 616 yards and 9 touchdowns. The third stand-out is #21 Suarez who has 37 catches for 583 yards and 5 touchdowns on the season.

“Defensively, they are very Multiple and have a scheme for whatever you try to throw at them,” Martinez said. “They will load the box if you’re a run heavy team and they play off if you’re a spread team. Their defensive line has incredible get off and motors. They create a lot of problems for the offensive lines they face. Senior #58 leads the charge with his energy and toughness. He plays nasty and makes it tough to find any rhythm on offense.”
Taft Head Coach had the following to say when asked what his team needs to do to be successful Thursday: “We need to execute offensively and stay balanced as far as our run/pass is concerned,” Castellano said. “We also need to protect the football and do a good job of tackling on defense.”
The Greyhound HC was also asked his thoughts on what has been the positives thus far this season and he had the following to say: “The team unity has been a positive as our kids are very unselfish,” Castellano said. “hey play for each other and are not about themselves. They have great work ethic, pride and good character.”
“When it comes to areas where we have struggled, it would probably be our depth and inexperience,” Castellano said.”
Natalia Outlook
In recent history, the Natalia Mustangs have had success the past two seasons vs. the district. Natalia defeated the 2nd seed out of this district (Hebbronville) two seasons in a row in the Bi-District Playoffs and also defeated district champion Odem a season ago in a non-district battle.
“Natalia is a very good football team that is very well coached,” Castellano said. “They are very athletic at all skilled positions and their lineman do an outstanding job on both sides of the ball,” the Taft HC noted when asked about facing the Mustangs.
The only issue is, Natalia enters this battle coming off a two-game skid vs. state ranked Poth as well as vs. a hungry Karnes City squad last Friday night.
“We will have to take away their QB as he is the engine of their offense and we will have to be physical up front and move the line of scrimmage,” Martinez said. ” Field position and ball security are always important, but more so against a food football team like Taft.”
Natalia will need to return to what was successful for them all season and that was being the more physical football team on the field. Natalia must return to being good tacklers and also much more confident on the offensive side of the football. Natalia will need to bring the energy early like they have the past two seasons vs. Hebbronville and pounce on the Greyhounds early, in order to set the tone.
Success is won up front and Thursday night will be no different vs. the Hounds. How the Mustangs play up front will play a huge factor in what type of night the boys in blue have on both sides of the football.
Turnovers will also be key. Coming into Thursday night’s battle vs. Taft, Natalia still holds a 26-5 advantage on the season in this department. Natalia will need to find a way to force turnovers and do a better job than the previous two games with making smart decisions and securing the football.
Last but not least, the Stangs will just need to get back to playing with a big more swag and confidence. Natalia has not been themselves and they can’t afford a two-game skid to result in an early exit. The boys in blue are a great football team with multiple weapons. They need to come out fired up and let the Hounds know early, why they are in this battle as the 2nd seed in a competitive 15-3A (Div.II).
Playoff Game is set
The Mustangs and Greyhounds will battle this coming Thursday at 7:30 p.m. at Three Rivers in the Bi-District Battle. All playoff tickets will be sold on site at Three Rivers ISD Box Office. Coach Martinez and the Mustangs are asking fans to come out early, wear blue, be loud and make it a true home-field advantage since they are the home team Friday night. Last Friday night, it was way too quiet at Mustang Stadium.
Natalia is 7-3 and Taft is 8-2 on the season, but both teams are -0 when it comes to their playoff run. It is win or go home time now folks! Head down to Live Oak County Thursday and back the blue! I will see you in Three Rivers! #TTP #WeBelieve
By Eric Smith
Staff Writer