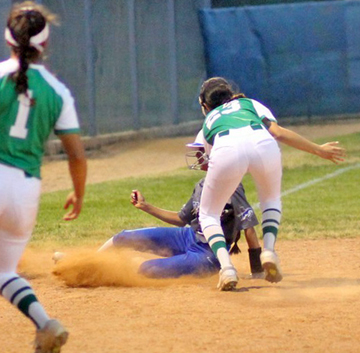 The Natalia Lady Mustangs (20-4-1) were able to win their 20th game of the season marking the second year in a row to reach the 20 victory mark. Natalia has won at least 20 games in seven of the last eight seasons with the 2012 season being a program history best 30 wins.
The victory last Friday at Lady Mustang Field didn’t come all that easy, as the Pearsall Lady Mavs (9-5) were in town. Freshman Woodson had another strong performance on the mound, as she pitched 7.0 innings, allowing just two hits, walking one and striking out eleven, giving up two runs, neither of which were earned.
Offensively, Natalia had pretty good success with eight hits, but they struggled to produce enough runs to truly take control of this game.
Pearsall got their lead-off batter on in their opening at bat, before Natalia was able to shut-down the Lady Mavs with an F5 and two Woodson Ks.
Natalia scored their first run of the contest, thanks to Freshman stand-out Taty Alvarado getting on base taking four straight balls. She was able to advance to 3rd on a single by Bivi Figueroa before scoring on an error put into play by Trista Vera.
In the top of the 2nd inning, Natalia’s Woodson started the inning off striking out Pearsall’s sixth batter in the line-up who wore #10. Natalia then used a 1-3 and a 5-3 to get out of the inning.
The second run of the game came with a two-out rally. Natalia’s Alvarado found a way once again to make something happen. This talented young lady started off the inning with a single to the left side, before stealing 2nd base. She was able to score on a double up the middle by KK Lara to give the Lady Stangs a 2-0 lead.
This lead stood until the top of the 5th inning. Pearsall used a hit-by a pitch and a Natalia error to put runners on before scoring on an additional error and a fly out to tie things up.
Natalia scored the game winning run in the bottom of the 5th. Once again, their run came with two outs. Natalia’s Woodson was able to get on thanks to a fielder’s choice put into play. She advanced to 2nd on a single by Gabby Contreras before advancing to 3rd on a hit by a pitch by Gabby Munoz. Woodson scored the game winning run, thanks to an Alvarado single to the left side giving the fans in blue plenty to cheer about.
In the top of the 6th, Natalia’s Woodson continued to dominate with 3 straight Ks, before watching Natalia strand one runner on.
In the 7th, Natalia used a 2-3 defensive play and two final Woodson Ks to finish off the Lady Mavs for an impressive 3-2 defensive victory.
“We had some fielding and base-running errors that put us behind the count earlier in the game, but our girls fulfilled their role and found a way to finish under pressure,” Coach Tamara Bedford said. “We are getting better every day as we prepare for the continuation of district play.”
At bat: Trista Vera 0-3, Alvarado 2-3-1RBI-2runs scored, Munoz 1-2, Contreras 1-3, M. Figueroa 0-3, Lara 1-4-1RBI, B. Perez 1-3, Woodson 0-2-1run scored and B. Figueroa 2-4.
Defensive Put-Outs: B. Figueroa 12, Contreras 7, Munoz 1, Alvarado 1. Assists: Woodson 3, Contreras 1, Munoz 1, B. Figueroa 1.
Upcoming Games
Natalia was on the road on press night as 30-3A resumed with a road game in Dilley. This coming Friday, old district rival Lytle comes to town for a 30-3A battle. Natalia has run-ruled the Lady Pirates once in non-district play. The JV game is set for 5:00 p.m. with the varsity contest set to begin around 7:00 p.m. Come early, be loud and grab an early seat to cheer on the girls in blue.
Tuesday, April 2nd is arguably the biggest 30-3A game of the season, as they battle always tough district foe Jourdanton for what should be for the District 30-3A title. Game time in Atascosa County will also be at 5:00 p.m. for the JV and 7:00 p.m. for the varsity. Jourdanton is 12-6-1 overall and picked up a lop-sided win over Lytle in their district opener last week.
By Eric Smith