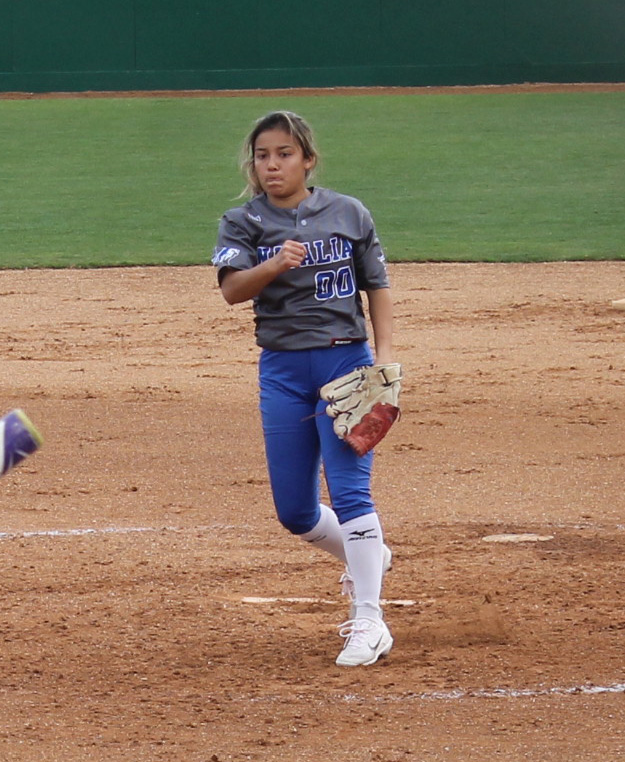 For the second straight 26-3A contest, Natalia’s Daniella Garza was virtually untouchable as she held the previously state ranked Poth Softball team to a single hit during the six-inning run-rule contest.
Unlike the Karnes City game in which Natalia was held to four hits, the offense came alive in Wilson County and looked like a well oiled machine. Natalia belted out 17 hits during the game en route to a 10-0 shut-out road win.
“These last two games have been good tests for our team,” Coach Travis Crowley said. “Our pitching has been the staple of the team. Versus Poth, I was happy we hit the ball early and were extremely aggressive on the bases.”
Natalia set the pace in their opening at bat, as they used a Trista Vera single, a SAC bunt by Megan Castro, a single by Biviana Figueroa, a walk by Daniella Garza and a single by Felicia Guzman to score three runs.
In the bottom of the 1st, Poth got their first and only hit of the contest. Poth like Karnes City, only had four base runners reach base with no more than one in a particular inning.
Natalia put things on cruise control, as they added four runs in the top of the 2nd. These came courtesy of singles by Gabby Contreras, Gabi Sontoya, a triple by Vera, a double by B. Figueroa and a single by Garza.
The Lady Mustangs rounded things out with a run in the 4th, one in the 5th and one in the 6th en route to their 10-0 victory.
“Late in the game we worked on some different things that I am hoping will pay off down the road,” Crowley said.
Garza pitched 6.0, allowed one hit, struck out eight and walked 0 in the contest.
At bat: Vera 3-4-3runs scored-2RBIs, Castro 1-4-2RBIs, B. Figueroa 3-4-2runs scored-1RBI, Garza 1-3, Mariah Joseph 0-0-1run scored, Perez 1-3-1run scored, Guzman 2-3-2RBIs, Dezarae Perez 0-0-1run scored, J. Figueroa 2-4-1RBI, Contreras 2-4-1run scored and Sontoya 2-3-1run scored.
Upcoming Games
This coming Thursday the Lady Mustangs will welcome the Brooks Academy Lady Bengals to town for a 7:00 p.m. 26-3A battle.
Natalia will then resume district play on Friday, April 6th as the Jourdanton Squaws will come to town for a huge district showdown for a share of the district title.
By Eric Smith