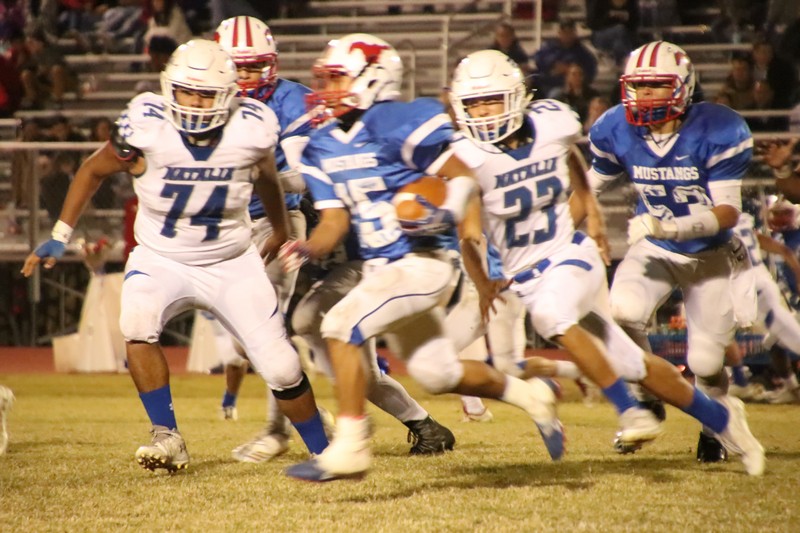 Throughout the season, Natalia won the toss on a number of occasions and always chose to defer to the second half.
Last Friday night in Nixon, Coach Ilyan Martinez decided to shake things up a bit, hoping to reverse their luck. When Natalia won the toss, he chose to receive as the offense went to work early and often versus the Nixon-Smiley Mustangs in a must win contest.
After striking on their first drive, the offense went on to score six additional times en route to a dominating road victory.
Defensively, after a sloppy first drive outing versus a struggling Nixon offense, Natalia made adjustments and turned in a dominating overall performance in which they held the home squad to 128 yards of offense including only 8 rushing yards on the night.
“I thought our kids did a great job of adjusting and settling in after we gave one up early,” Martinez said. “I was happy with the physicality and effort of our kids.”
The biggest disappointment of the night was that impressive outing didn’t result in a “shout out” by the Nixon-Smiley announcer who interrupted a good ol Friday night Football game with 50+ public service “shout-outs” to anyone and everyone which made for an interesting night of football.
“It is always good to get a win,” Coach Ilyan Martinez said. “I was really proud of the players and our staff. I thought they were well prepared and it showed. We will continue to get better each week and that has been our goal since day one.”
The Natalia Mustangs, as mentioned, rolled offensive from drive #1 to the conclusion of the game.
Natalia started the contest, with a 12 play drive that included a mixture of runs and passes and concluded with a Wyatt Woodson touchdown pass to 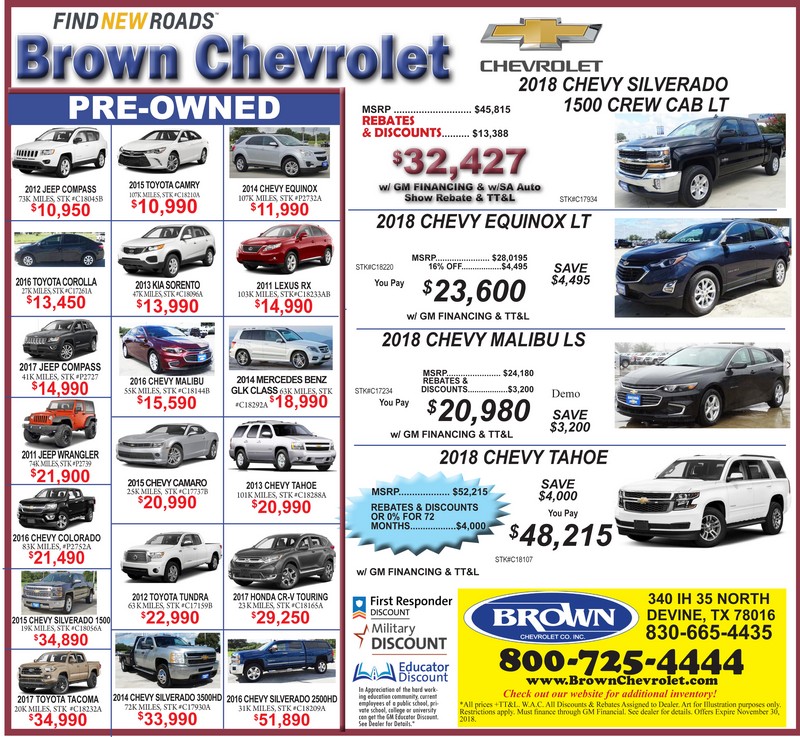 Evy Curiel for a 10 yard strike. This gave the Stangs a 7-0 lead following an Oscar Martinez PAT.
N-S struck back, as they needed fourteen plays to march 60 yards down field eating up over five minutes of the clock. They would score on a pass play with 3:11 to go as the PAT failed. This would be the only success the home squad Mustangs would have.
Natalia added three additional first half touchdowns, which included a Woodson to Diego Zapata 78 yard strike (1:30 to go in 1st Q), a Woodson to Xavier Vasquez 14 yard strike (8:47 to go in 2nd Q) and a Woodson 1 yard touchdown run with 1:16 to go in the first half allowing Natalia to take a solid 25-6 lead into the half.
In the second half, Natalia didn’t let us, as they scored three additional touchdowns including two Jimmy Ray Gutierrez touchdown runs as well as a Woodson to Vasquez impressive 79 yard strike which was icing on the cake. This allowed Natalia to run past the home squad 49-6 and keep their playoff hopes alive on life support.
The Natalia Mustangs finished with an impressive offensive outing with 493 yards on 66 plays which included 299 yards passing and 194 rushing.
“I am really proud of our offense,” Martinez said. “They have been working hard to get things rolling and I felt like Friday we played with a ton of confidence. I hope we can continue to build on that as we head into the final week of the season.”
One area that continued to be a disappointment was the # of penalties on the squad. Natalia suffered a season high 12 penalties for 155 yards compared to 8-80 by the home squad.
“I am proud of all of our kids for responding after a rough patch of games,” Martinez said. “Our kids take a great deal of pride in representing our program at the highest level and they did a great job of handling that Friday night.”
Final Individual Stats: Passing: Woodson 12-22-299-4TD-1INT. Receiving: Vasquez 6-159-2TDs, Zapata 1-78-1TD, Matt Contreras 2-28. Rushing: Gutierrez 25-89-2TDs, Woodson 12-69-1TD. Defensive Stat Leaders: Mike Martinez 2 assists, 5 solo, 1 sack; Matthew Contreras 7 assist, 1 solo; Joel Rios 5 assists, 3 solo; Dustin Soto 6 assists, 1 solo; Xavier Vasquez 4 assists, 2 solo; Demetri Martinez 1 assists, 5 solo; Diego Zapata 2 assists, 3 solo, 1 interception; Manny Padilla 1 interception.
Final game Friday Night
Although Natalia can only worry about Natalia Friday night, it is no secret there will be a few watching their phones in relation to what will be taking place in Frio County.
The Natalia Mustangs have the odds stacked against them when it comes to securing a 4th and final playoff spot, but there is still a chance.
First and foremost, the Mustangs MUST defeat the Skidmore-Tynan Bobcats (7-2, 3-1) squad who will come into Natalia with a ton of confidence this Friday night. If the boys in blue can do that, the Dilley Wolves MUST drop their finale home contest against the winless Nixon-Smiley Mustangs.
Skidmore-Tynan of course as you may remember, upset Natalia a season ago in the Bi-District playoffs as there was plenty of controversy as the Offensive Coordinator had gotten into the Natalia locker-room the week prior at Karnes City. According to sources, that offensive coordinator is no longer with the program and there was no sighting of a Skidmore-Tynan coach in the Natalia locker-room in Nixon (chuckle chuckle).
Skidmore has the following results this season: Lost to former Natalia Coach Chad Graves and Palacios 28-7, beat CC John Paul 41-35, beat Benavides 56-0, beat Rivera-Kaufer 50-7, beat Runge 45-6, beat Dilley 36-20, fell to Poth 56-14, beat Nixon-Smiley 19-6 and beat Stockdale last week 26-14.
“Skidmore-Tynan is a good football team,” Martinez said. “They are coming off a good win over Stockdale and I expect them to be well prepared Friday night. We are excited about the game versus Skidmore. We felt like we gave one away to them a season ago in Bi-District and we are eager to get another shot at them this Friday night.”
Skidmore-Tynan runs the Slot-T offensively and a 4-3 cover 2 defensively.
“It’s Parents Night and our last home game for our seniors, so it will be emotional for everyone,” Martinez said. “I expect our kids to leave it all on the field.”
The Mustangs and Bobcats will kick-off at 7:30 p.m. this Friday night at Mustang Stadium. Although playoff hopes seem to be doubtful on paper, let’s do our part in supporting our Mustangs in their quest to get a little payback versus the Cats. If Natalia can take care of business, maybe the luck of the Mustangs will carry to Frio County and the red and blue Stangs can pull off that victory which would push Natalia into the playoffs. It is why you play the game folks, anything is possible. #TTP #ChampionshipCulture
By Eric Smith 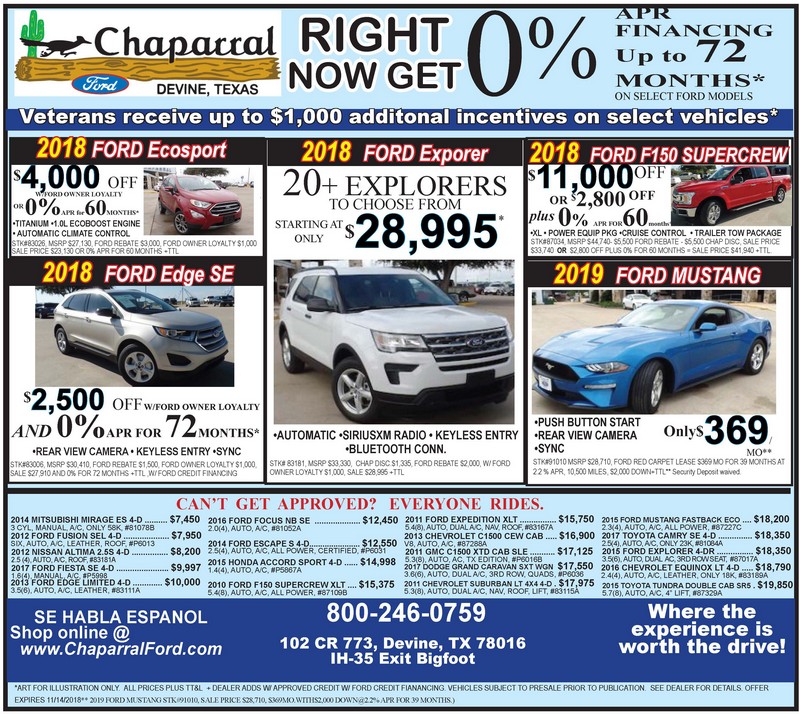