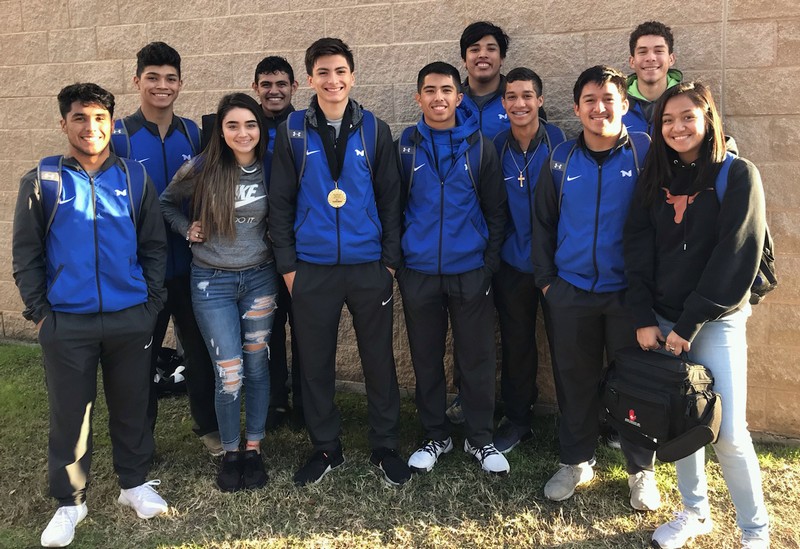 The Natalia Mustangs continued to show overall improvement, as they competed in a three day Ingram Varsity Tournament last weekend. The boys in blue finished the weekend in the Hill Country 3-2 overall, as they picked up wins over Center Point, Kerrville Home School and Menard while dropping games to Ingram and Rocksprings.
“After a long week of action, we finished 3-2 in the Ingram Tournament and we continue to get better,” Coach Justin Welsh said. “I am proud of the boys for continuing to battle when things are not going our way.”
Center Point
Natalia opened the tournament against the Center Point Pirates on Thursday. It was a slow start out of the gates for the Mustangs, as they were edged 15-13 in the first half of action.
Natalia turned things up in the second half, as the Stangs out-scored the Pirates 16-4 in the 3rd quarter thanks to Falen Villarreal and Jimmy Ray Gutierrez leading the way scoring. This allowed Natalia to take a 29-19 lead into the 4th quarter.
The Mustangs finished with a pretty good quarter offensively, but another stellar outing defensively as they out-scored CP 10-4 thanks to Villarreal scoring seven of the ten points. This fueled the Stangs to a 39-23 victory.
“Faelan Villarreal came off the bench and provided us a much needed spark in the second half,” Welsh said. “This was a good win versus a scrappy Center Point team.”
Scoring Leaders- Villarreal 10, Chris Suarez 9, Jimmy Ray Gutierrez 5.
Rocksprings
The final game on Thursday was against a very talented Rocksprings Angora ball club. Rocksprings came out and used their athleticism and size to dominate this contest. The Hill Country squad out-scored Natalia 19-4 in the 1st quarter and 13-4 in the second quarter en route to a 32-8 lead at the half.
Natalia gave a better effort in the 3rd quarter, as Ramirez and Armendariz combined for eight of the Stangs 13 points. Natalia edged Rocksprings 13-11, but still trailed 43-21 going to the 4th.
Rocksprings finished strong with a 19-12 advantage dispite a spark by Suarez by Natalia who nailed a 3-pointer, a bucket and two free throws to finish things off. As a result, Natalia fell 62-33.
Scoring Leaders- Ramirez 8, Suarez 7, Gutierrez 5.
Ingram
Natalia opened up tourney play on Friday versus the host Ingram Warriors. The Stangs came out and kept things close in the opening quarter, as they were edged 11-8 offensively.
Things began to unravel quickly, as Ingram out-scored Natalia 19-4 in the 2nd quarter fueling the Warriors to a 30-12 half time advantage.
Ingram out-scored Natalia 14-7 in the 3rd quarter and 11-7 in the 4th allowing for a 55-28 victory over the Mustangs.
“We came out with a lot of energy and were able to build a 5-point lead in the first six minutes of the game, but were unable to sustain it against their pressure,” Welsh said. “They had a lot of talent on the floor and could score from various places.”
Scoring Leaders-Armendariz 9, Stallworth 6, Ramirez 6.
Kerrville Homeschool
The Mustangs got back on the winning road versus a Kerrville Home School Croc ball club in their final game on Friday. The Stangs were able to out-score the Kerrville squad in three out of the four quarters, as Matt Contreras and Jared Stallworth led the charge offensively.
Natalia was able to out-score the Crocs 11-2 in the opening quarter, before being edged 13-12 in the 2nd. This still allowed Natalia to hold a 23-15 lead at the half.
In the second half, Natalia closed the door, out-scoring Kerrville 10-7 in the 3rd before opening things up in the 4th with a 26-7 advantage to finish with a 59-29 victory.
“We came out flat and allowed Kerrville to hang around until the 4th quarter,” Welsh said. “Defensively, we created some turnovers in the 4th which allowed us to score a season high 26 points in the quarter.”
Four Mustangs produced offensively, including Villarreal with 7, Gutierrez with 7, Stallworth with 7 points and Contreras with 4.
Scoring leaders- Contreras 15, Stallworth 14, Villarreal 7, Gutierrez 7.
Menard
The Natalia Mustangs were able to hold on for a gritty victory in the tournament finale versus the Menard Yellow Jackets. After taking an early 9-2 lead versus the Jackets, Menard was able to fight back and trail 9-7 after one quarter of play.
In the second quarter, Menard out-scored Natalia 13-2 allowing the Jackets to hold a 20-11 lead at the half.
Natalia turned up the tempo in the 3rd quarter on both ends of the court, as Contreras and Xavier Vasquez led the Stangs to a 12-3 advantage in the 3rd resulting in a tied game (23-23) going into the 4th.
The Mustangs outscored Menard 12-7 in the 4th en route to a 33-30 victory.
“We finished the game on an 8-0 run to get the win,” Welsh said. “Jared Stallworth hit the go ahead jumper with a little over a minute left and Jimmy Ray sealed it with a nice baseline drive and lay-up.”
Scoring Leaders- Contreras 11, Armendariz 6, Gutierrez 5.
Juelian Armendariz was named to the All-Tournament team for the Ingram Tournament.
“I continuously tell the guys that in the process of trying to win games, we want to be tested in different ways,” Welsh said. “We want to win close games and we have to be able to come from behind at times. This will all prepare us for a tough district.”
Upcoming Games
Natalia travels to Frio County for a re-match with Pearsall this Thursday at 5:00, 6:15 p.m. and 7:30 p.m.
Natalia will then battle Charlotte on December 27th at home at 2:30 p.m.
By Eric Smith