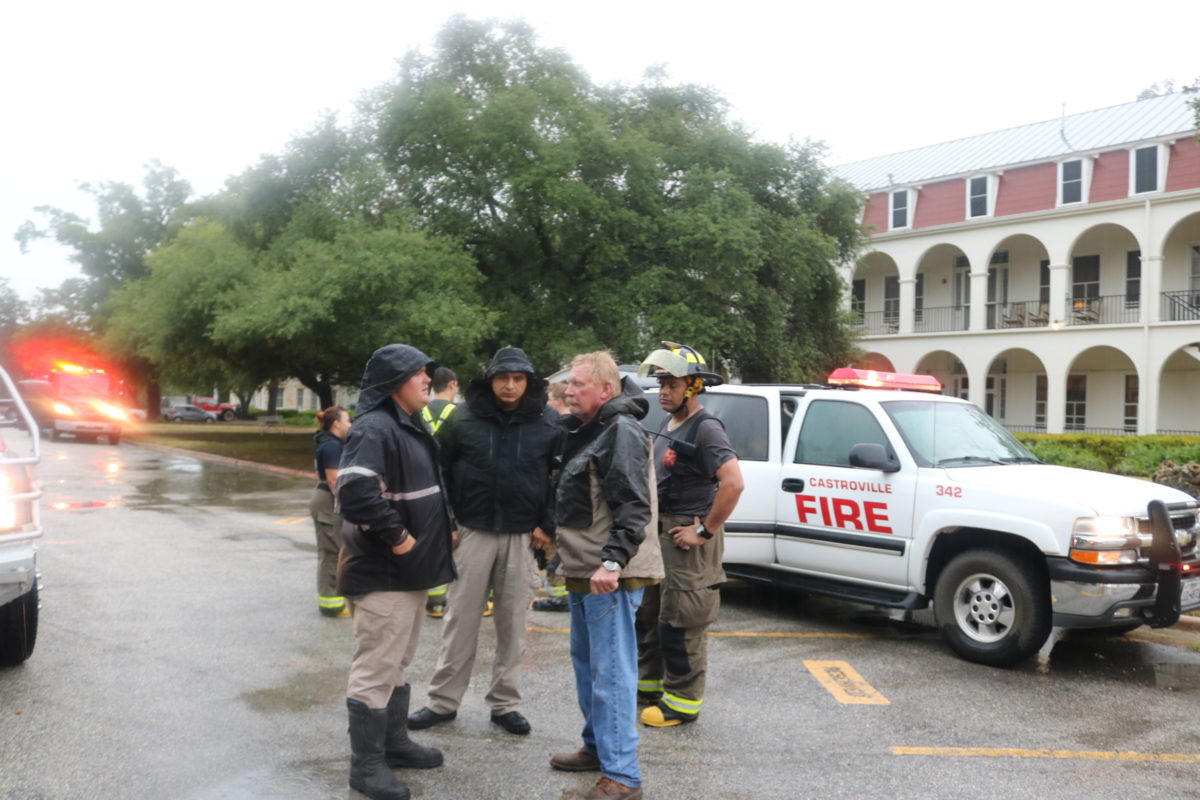 “There were flames shooting out from the steeple on top of the building as well as from the chimney also”, said Rick Lair, Castroville Volunteer Fire Department.

Lightning is believed to be the cause of the early morning fire on Monday, August 7 that struck a historic building at the Moye Center, a place where  70 men from the Devine area had just stayed for an ACTS retreat. They had just returned home from the Retreat on Sunday morning. A few weeks ago 80 teenagers from Devine spent the weekend at an ACTS Retreat there also.

The Bexar County Fire Marshalls on scene to investigate.

“We were able to contain the fire to the attic of the building but had a hard time getting to the fire. The attic had a lot of wood, but due to the structure of the ceiling of the second floor we couldn’t get through the floor of the attic. The LaCoste VFD arrived and was able to use the gun on their truck to spray water into the opening of the attic. The building ended up with water damage but at least we were able to save the structure and possibly some of the contents,” he said.

The main damage was in the attic of the historic old school house, one of the buildings on the grounds of the Moye Center. It is known as The First School House Sisters of Divine Providence founded in 1871.  Inside the old school house are about eight or nine bedrooms which are often used to house retreat leaders.

It rained the entire time the fire fighters were battling the blaze.

According to Chief Lair, he had to leave the scene at one point as there was another structure fire. He also said that fire District 2 was battling three home fires that same morning.

The lightning storm lit up the  Medina County skies and a lot of rain was dumped on the area.

As of around 1 pm this Monday, August 7, rain totals reported were as follows:

A video of the fire at the Moye Center can be seen on our website. It is courtesy of Castroville resident Domingo Perales, Jr.

“I was photographing the rain at home around 6:00 a.m. when at one point I heard a loud bang. Shortly after, I saw the flames and  smoke coming from the downtown area  at the Moye Center and drove over and took a video. Flames were shooting out the top of the building near the chimney.”

Perales filmed it from a parking lot across the road on highway 90 near the meat market. 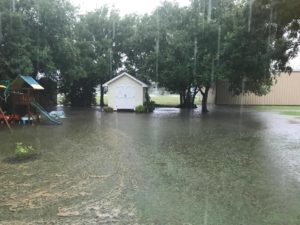 Here is another photo (below) sent in by Breann Marek from her home in Devine on Park Avenue.