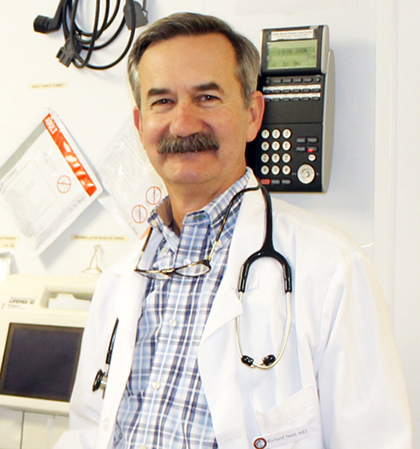 Local Dr. Richard Neel (of Little Alsace and Uvalde Urgent Care Clinics) shared his thoughts about masks and their role in slowing the spread of COVID-19. He also gave us an update on how high dose melatonin continues to help many overcome COVID-19.
“So all masks are going to help, but there is an enormous difference in the variety of cloth masks that people are wearing, so it’s hard to say how effective cloth masks are, Dr. Neel said.
“There is going to be a lot more virus in the droplets of a cough or sneeze than there is in the air, so any mask is going to help by filtering a lot of those droplets…how well it works is going to depend on the number of layers and the weave of the cloth.”
That being said, “I would still recommend surgical masks over a cloth mask,” Dr. Neel said. “A surgical mask has a little piece of metal at the top that you can bend over the contour of your nose. If worn correctly, that also helps keep the mask in place instead of slipping around like most of the cloth masks do.”
“People don’t realize that a lot of how sick you get, depends on how much virus you get in your body—it’s called the ‘viral load.’ That’s why I always say—‘Not everyone at the picnic gets sick.’ Look at a loaf of moldy bread for example, some of the bread has more mold on it than other parts.”
Other tips and thoughts…
“I still think that one of the best things you can do as a preventative measure against COVID-19 and even the flu is to keep your Vitamin D level up. Most adults can take around 2000 iu Vitamin D3 a day if they don’t get a lot of sun, and you can get your levels checked with a simple blood test. If people would just spend more time outside, you can get a lot of vitamin D that way. You can get 1,000 iu of vitamin D by simply laying out in the full sun in a bathing suit for 4 minutes.”
He reports that “New COVID cases seem to be slowing down in the area, but I am already seeing a lot of strep cases in students since schools began opening—so I am sure COVID can spread just as easily.”
Melatonin update…
Neel reported that the regimen of high-dose melatonin, Vitamin D3 and Vitamin C is still working well for the many patients he has treated near and far.
“I still get a lot of patients who call the next day and say ‘Hey I started the melatonin and I’m way better’ that next day, but especially with this second wave and new strain of COVID, it has been taking longer as in a few days for the melatonin to work for some patients, and higher doses in some cases as well.”
Getting the dose right is very important, and it is always recommended that you follow a physicians order.
“I had a patient come into one of my clinics recently who said she had started taking low doses of the melatonin, but not enough, but when she became sicker and got hospitalized they used high doses of melatonin and it helped a lot. While I still haven’t gotten to speak to the hospital, I am excited to hear of a rural hospital using it, and I look forward to speaking with other physicians about it.”
Neel discussed his rationale for melatonin as an adjunctive treatment for COVID-19 this past March in an interview with us. He pointed to evidence that melatonin is one of the most powerful anti-oxidants available (to protect against oxidative stress on the lungs), and that high doses of melatonin could block the deadly cytokine storms that often occur in COVID patients.
He soon began using melatonin in his own patients who came to him in early April, and has treated hundreds and hundreds of patients in the past 4 and a half months.
This type of “off-label” use of drugs is a common practice in the medical community. Doctors and researchers all over the world continue to work toward finding the most effective treatment for COVID-19.
Discussing Ivermectin
Dr. Neel also briefly discussed an interest in learning more about a new study out of Australia that suggests an anti-parasitic drug called Ivermectin that suggests it could also be an adjunctive treatment for COVID-19.
By Kayleen Holder

Background
Dr. Neel is now the co-owner of The Little Alsace Urgent Care Clinic in Castroville and Uvalde, TX.
He was recently appointed as the City of Devine Public Health Authority.
Dr. Neel served over 20 years as a Chief Flight Surgeon in the U.S. Air Force before his retirement as a Colonel. He lived in Europe serving in the USAFE (US Air force Europe) for 8 years. For 2 of those 8 years, he served as a personal physician for Ambassadors, General Officers and Senior State Department Personnel.
He was deployed for combat operations in the Middle East and Bosnia. He has over a thousand hours of flying time in jet fighters, bombers and helicopters. He flew more than 25 combat missions during deployments.
His many decorations include an Air Medal for assisting in the helicopter rescue of 32 people from a sinking tanker during a Hurricane that was more than 300 miles off the coast of Ireland. He led emergency response teams for NASA space shuttle emergency landing sites in Spain, Morocco and Gambia.
On September 11, 2001 he led an Air Force Emergency Team at the Pentagon. For many years he served on a team of subject matter expert in chemical and biological warfare for the US Pentagon.
He also holds a Master’s in Public Health from Harvard.