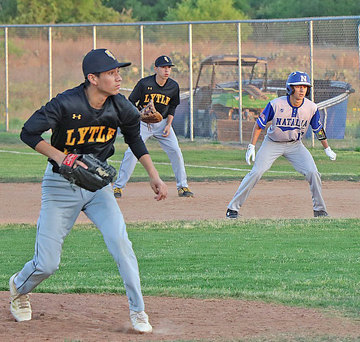 The Natalia Mustangs were knotted 1-1 with rival Lytle going into the 4th inning last Friday in their first district meeting on the diamond since the mid 1990s. The Pirates were able to produce a four run 4th inning which fueled them to a huge 13-2 victory over the home squad Mustangs. Lytle was able to out-hit the Mustangs 15-7 despite Natalia playing errorless defense.
“We had too many miscues down the stretch versus Lytle,” Coach Jeff Terry said. “We will get back to work and move on and prepare to get back on the winning track.”
Lytle got on the board in the top of the 2nd inning. Ayala started things off with a double for the Pirates and eventually scored courtesy of a pass ball.
Natalia responded in the bottom of the inning. Manuel Garcia singled to get things going for the Stangs. He was able to steal 2nd base, before scoring courtesy of a Manuel Garcia single. This allowed the boys in blue to tie the game and this is how it stood until the top of the 4th.
The black and gold used one hit by a pitch by Garcia, a Placido single, a Flores single, two walks by Wilson and Deleon followed by a big double by Guerrero to produce a four run inning giving the Pirates control.
Lytle went on to score two runs in the 5th and six huge runs in the 7th to run away with this district game.
Natalia’s final run of the game came in the bottom of the 7th. Natalia used an AJ Felker walk, an error put into play by Matt Contreras and a single by Jeremiah Castro to produce their 2nd and final run.
Natalia used three pitchers in the loss versus Lytle. Garcia pitched 3.2 innings, allowed four hits, walked five, struck out three and gave up five runs, four of which were earned. Diego Zapata pitched 1.1, allowed two hits, struck out one and gave up 2 earned runs. Contreras pitched 2.0, allowed nine hits, allowed six runs.
At bat: Zapata 0-2, Garcia 1-4-1run scored, Castro 1-3-1RBI, Mendez 1-3, Contreras 1-4, G. Martinez 0-2, Felker 0-3-1run scored, Arellano 2-3-1RBI, Gomez 0-3.
Defensive Put-Outs: Arellano 7, Contreras 5, Zapata 3, Gomez 2, Felker 1, Castro 1, Garcia 1. Assists: Castro 3, Contreras 2, Garcia 2.
Upcoming Games
This coming Friday, the Mustangs will travel to LaSalle County as they begin they will battle the Cotulla Cowboys for the first time in 30-3A. On Tuesday, April 9th Natalia will be open.
By Eric Smith