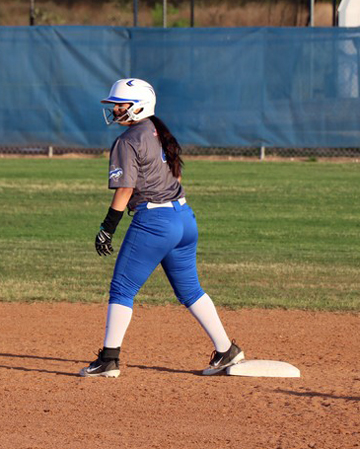 The Natalia Lady Mustangs were able to pick up win #21 in Frio County last week, but it did not come easy. On paper, Natalia dominated stats, but on the scoreboard not so much.
Despite out-hitting the Dilley Lady Wolves 11-4, the girls in blue rallied past Dilley thanks to a three run 7th inning en route to a 4-3 victory.
After a scoreless first inning where both squads stranded a runner, the girls in blue struck first in the top of the 2nd inning. Bryanna Perez was able to get on with a walk and eventually scored thanks to a stolen base, a ground out by Abi Woodson and an error put into play by Gabby Contreras.
Dilley was able to tie the game in the bottom of the 3rd inning. The Lady Wolves used one of three total walks to their advantage. A base on balls followed by a stolen base, an error and a double resulted in a run scored and the game being tied.
In the top of the 4th, Natalia stranded two runners which were the 5th and 6th runners of the game. Dilley found a way to make play after play ending many threats by the Lady Mustangs.
Dilley took the lead in the bottom of the 4th inning. The Lady Wolves used a single and two errors to produce two huge runs giving the home squad plenty to cheer about. This lead, as mentioned, stood until the top of the 7th inning.
Natalia grounded out to lead off the top of the 7th before the rally began. Bivi Figueroa got things rolling with a huge double to the right side of the field. Trista Vera followed suite with a double which scored in Figueroa. Mena Figueroa continued the offensive production, as her single scored in Vera tying the ball game. Bryanna Perez and Woodson produced two additional singles allowing Natalia to score their go ahead run.
Natalia was able to shut down Dilley 1-2-3 in the 7th to secure their 4-3 comeback victory.
The Lady Mustangs stranded a total of 10 runners on base during the contest. Credit goes to Dilley who made a number of big defensive plays in the contest and kept things close.
Abi Woodson pitched the first 4.0 innings where she allowed four hits, walked one, struck out eight, allowed three runs, one of which was earned. Dez Perez pitched 3.0, allowed 0 hits, walked three, struck out one.
At bat: Vera 2-4-1RBI-1run scored, Taty Alvarado 0-4, Gabby Munoz 1-4, Contreras 2-3-1RBI, M. Figueroa 0-1, KK Lara 0-4, B. Perez 1-3-1run scored, Woodson 0-2, D. Perez 1-3-1RBI-1run scored, Gabi Santayana 1-2 and B. Figueroa 3-4-1run scored.
Defensive Put-Outs: B. Figueroa 10, B. Perez 3, Vera 2, Alvarado 2, Contreras 2, D. Perez 1, Santana 1. Assists: Alvarado 2, Munoz 1, B. Perez 1, B. Figueroa 1.
By Eric Smith