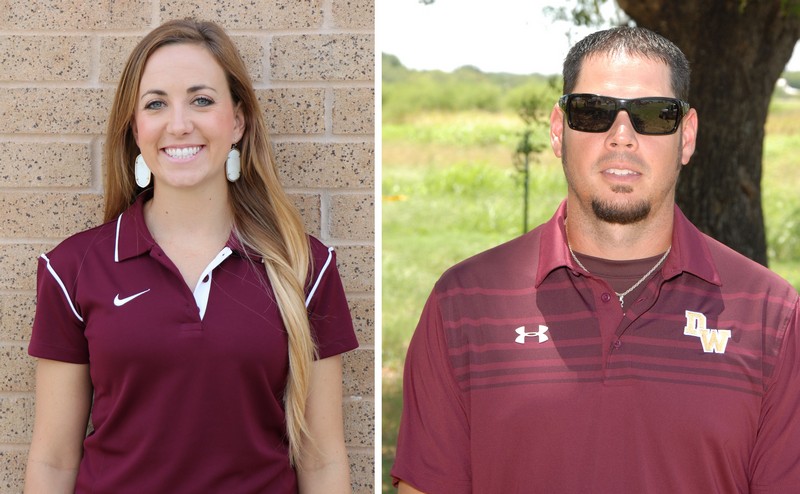 The Devine Warhorse and Arabian track programs have new leadership for the 2019 campaign that begins this Saturday at St. Mary’s Hall in San Antonio. Lynn Cozby led the Warhorse program beginning the spring of 1994 until his retirement after last school year; he also led the Arabian squad from 2011 through the 2018 season.
Lon Cozby and Khera Vay take the baton with focus on continuing the Tradition of Success motto that runs rampant throughout Devine’s athletic programs. District and Area championships are annual goals in track along with qualifying multiple athletes for regional and state competitions.
Although some may be unfamiliar with the unmatched success of the Warhorse and Arabian track programs over the last quarter-century, Cozby and Vay are not. Each has been integral parts of numerous District and Area Championships accomplished since 2010. Lon is in his 8th year at DevineISD while Khera is in her 7th year.

Quality coaches for any sport are hard to find but that is definitely not the case in this instance as Lon and Khera bring tons of experience and exhibit true love for the sport. Their attention to detail and ability to get maximum effort from all kids and their own unselfishness to work early mornings and late into the evening resonates with athletes on a daily basis.
“Being able to split head coach responsibilities so we can focus on coaching more kids is a huge benefit for us and for the athletes,” Vay and Cozby stated. “We can use each other as sounding boards for ideas and making sure that we are putting athletes in the right events for them and for the team to be successful.”
Vay and Cozby understand strength in numbers. Currently, there are 289 students from both the high school (121) and middle school (168) participating in Devine’s track program. With numbers like that, Cozby and Vay will do what the elder Cozby did during his time as leader, which is to have an abundance of trust in their assistants.
Devin Rotramel, Kim Lane, Quenton Sanders, and Jacob Sanchez all return from Lynn Cozby’s staff and know expectations are high annually; Hannah Thompson is the lone new staff member but has excelled in her other coaching duties this season and will be a positive addition.
“Our assistants share our vision,” according to Cozby and Vay. “Each coach has their events but each coach understands that maneuvering athletes is a must at times to achieve our best team performance. That says a lot about the selflessness they each have.”
When a program has sustained high levels of success over a long period, a shakeup in leadership can sometimes create changes that kids simply cannot adapt. Do not expect that to be the case in this situation, however.
Cozby and Vay will take advantage for opportunities to tinker with small things such as adding more variations of injury prevention, strength work, and pre-event warm up to a program that is already very structured and thriving. They will increase expectations for each event area and set standards for level of completion.
Devine has won a plethora of pre-district and district meets. Cozby and Vay have increased the number of competitive meets throughout the pre-district schedule in order to eliminate any big-stage jitters normally present once championship season rolls around in April and May.
As Cross Country has done under Vay’s tutelage, track will present a Track and Field Athlete of the Week. Keeping kids engaged in a sport that relies on individual accomplishments to achieve team success is not easy. Vay adding Runner of the Week recognition is a nice way to say thank you to the kids for pouring their heart and soul into such a demanding sport.
Cozby and Vay have the knowledge, passion, and motivation to keep an admired program rolling strong. Neither settle for less than possible whether it is expectations from themselves or expectations from their athletes.
More district and area championships are in store for the Warhorses and Arabians. Although Lynn Cozby is no longer the head coach, the program he led for twenty-four seasons in great, capable hands.
By Jerel Beaty
Staff Writer