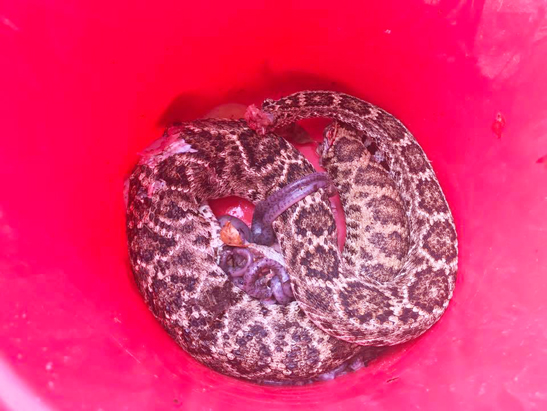 Rio Medina,TX–A local resident, Clara Rose Coble, got the surprise of her life this past week as she walked around her yard checking on the garden….15 Rattlesnakes underneath a bush!

She made the discovery around 3:30 in the afternoon, when she decided to go out and check on the tomatoes in her garden, to see what damages the storm might have done.

“I was just making my rounds around the yard when something caught my eye,” Coble said. “At first I thought maybe it was a piece of trash or something that had blown underneath the bush, but what I actually found was a pile of snakes!”

“I ran to get my pistol, and I didn’t really know what was going on until I shot her, and that’s when I noticed the babies coming out and  realized she was giving birth!” Coble said. “My neighbor came over and helped my husband Dave get the rest of them. The momma rattlesnake was about 3 1/2 foot long, and the babies were just about 6 inches long.”

If you’ve never seen a newborn rattlesnake, well, now you have! Only a few inches long with pink skin, they look more like worms than snakes, but they are still venomous.

Coble added, “Evidently it is the season for rattlesnakes to give birth. The odd thing is that, on average, I read that rattlesnakes have about 8-10 babies. We counted 14! I also learned that after giving birth, the rattlesnake usually leaves. The babies get their own skin and start moving around within 4-5 days of being born. So, had it been a couple of days later, I would have had 14 venomous little rattlesnakes rolling around the yard!” she said as she shuddered and then added” Just the thought of our grandkids running around the yard with those snakes makes me cringe!”

“We had about 3.5 inches of rain that morning, so I guess she just found a nice moist spot and was nested up underneath there,” Coble adds. “She was not there the day before or I would have noticed her then. We are very cognizant of snakes. When you live out in the country you learn to watch out.”

However, she admits, “I’ve have never seen anything like this. It was very unusual, and very scary.”

She hopes sharing her story will remind others to be careful out here in the country.

“We have lots of little grandkids running around, so we are always watching out for snakes, and trying to educate them,” Coble said. “Teach them early, show them pictures and rattlesnake skins, so they’ll know what to look out for, and always beware of your surroundings.”

Like so many people have increasingly reported in recent years, this rattlesnake didn’t give Coble any warning.

“She didn’t rattle at me at all, even when I pulled open the bush to get a better look,” Coble said.