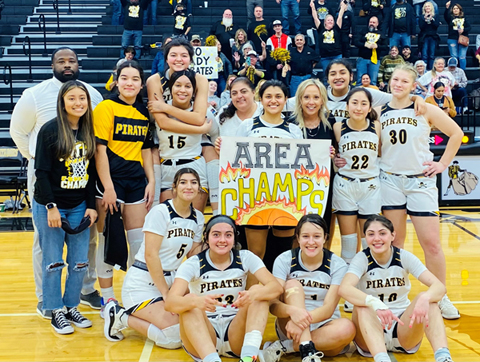 The Lady Pirates are powering through their playoff opponents. Knocking down Tidehaven at Bi-District and Nixon-Smiley at Area, last night they took on Karnes City for the Regional-Quarter Finals at Legacy High School. During district they lost to Karnes City 42-49 but then beat them 45-41 in their second meeting. Karnes City beat Columbus 45-41 at Bi-District and Blanco 50-44 at Area to get to this game against Lytle. The winner will face either Skidmore-Tynan or London at the Regional-Semi Finals later this week. Coach Lori Wilson’s twitter will have the latest information.
Facing Cuero on Tuesday, February 15th, the Lady Pirates controlled the game and won it 74-53. “We had unfinished business from last year with our season ending with COVID. Cadee Martinez and Katara Whitfield were two out of the five that did not travel last year so we said let’s do it for them and our two Seniors Sofia Hutton and Nicole Godines since it was her birthday. We came out strong on defense and put Tidehaven in foul trouble early. Our press took over and Tidehaven just could not manage the pressure. At the half we were up by 21. The third we came out slow and did not score but six points. Then the fourth we came out and just ran away with game. The last two and a half minutes we took the starters out and the second group with Whitfield finished off the game. This is a great TEAM win for the girls. They played and represented their school and community with PRIDE!! The last time the girls program won Bi-District was my first year in Lytle 2012-2013. So proud of the girls and all their hard work and dedication this year and we are not finished. The girls set a season record of making 28/32 free throws last night. We are now 25-9 for the year,” said Coach Wilson.

Calyssa Sevier with 26 points and was 7/7 from the free throw line. Fizz Hutton had 13 points and was 5/6 from the line and had some great steals. Cadee Martinez had 12 points and was 5/8 from the line. Katara Whitfield had 9 points and they were all from the line she was 9/10. Amelia Martinez had 4 points and was 2/2 from the line. Defensively, Sofia Hutton and Ariana Garcia were rebounding every ball they could, and each had two points. Rose Scotello had some great rebounds. Kaylee Diaz played good defense. Lunna Reyes played good defense and rebounded well. Birthday girl Nicole Godines did not score but she played great defense and ran the point great for us as they ran a box and 1 on Calyssa.
A special thank you goes to the Lady Pirates’ driver, Cowboy, for giving each player a yellow rose after the game and for getting everyone there and back safely. The team returned to Lytle Tuesday night about midnight and Cowboy had to be back to work at 4 am on Wednesday.
At the Area playoff game against Nixon-Smiley, Lytle’s fans drove to Seguin for an amazing 83-42 win! “From tipoff the girls’ full court press was on fire and Nixon could not manage the pressure. We had twenty-two steals and scored thirty-eight points from their turnovers. We ran the floor well in transition and scored twenty points in that category. The girls and coaching staff want to thank everyone for what they did for us on Friday before we left. The girls were so excited and felt so loved. Everyone got to play in the Nixon-Smiley game, and it was a TEAM win for the basketball program and the town of LYTLE!” added the proud Coach Wilson.
Calyssa Sevier 31 points, 9 rebounds, 7 assists, 12 deflections, 6 steals. Fizz Hutton had a double-double with 24 points, 5 rebounds, 3 assists, 3 deflections, 10 steals. Cadee Martinez 13 points, 9 rebounds, 2 assist, 1 deflection, 1 steal. Sofia Hutton 6 points, 4 rebounds, 1 steal. Katara Whitfield 5 points, 1 rebound, 1 steal. Nicole Godines 2 points, 3 rebounds. Amelia Martinez 2 points, 3 rebounds, 2 assists, 1 deflection, 3 steals. Kaylee Diaz 1 assist. Arianna Garcia 2 rebounds. Rose Scotello 2 rebounds.
By Dicy Chambers
Sports Writer