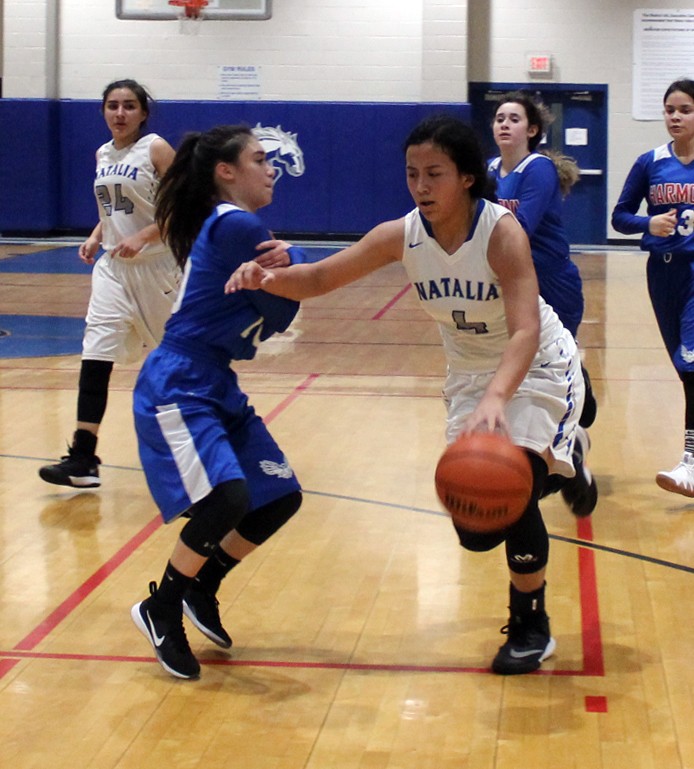 Natalia continued to take care of business, as they picked up their second straight 30-3A battle last Friday night in the Border City of Laredo. Natalia was able to outscore Harmony in three of four quarters including holding the home squad scoreless in the 3rd quarter. This resulted in a lop-sided 51-15 road victory.
“We came out and took care of business,” Coach Doug Lum said.
Sam Stallworth and Jelly Padilla had big starts to the contest, as Stallworth produced nine and Padilla six points in the 1st quarter. This fueled the Lady Mustangs to a 22-3 lead after one.
In the second quarter, Natalia cooled off and was edged 10-7 offensively, but still managed to take a 29-13 lead into the half.
Natalia came out and put plenty of distance between them and their opponent in the 3rd, out-scoring Harmony 16-0 thanks to the scoring efforts of six Lady Mustangs. This allowed for a 45-13 lead going into the 4th.
Natalia finished with a 6-2 edge allowing for a 51-15 victory.
Scoring Leaders: Stallworth 15, Padilla 8, Mariah Joseph 7, Angie Zapata 4, Zita Perez 4.
By Eric Smith