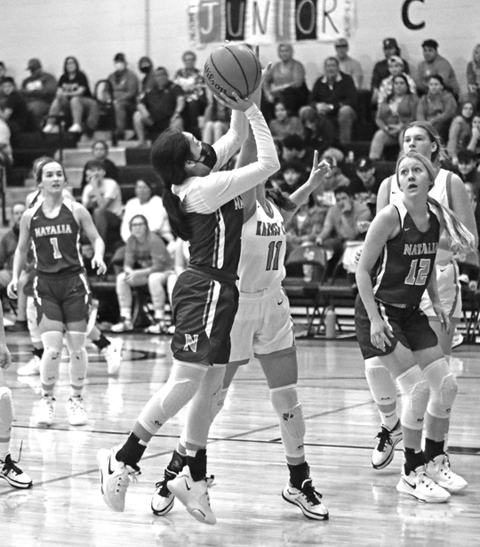 When Natalia traveled to Karnes City on Tuesday, the Badgers had to work hard to beat the Lady Mustangs. Only losing by 8 points, Natalia is now 4-4 in district and ready to take on Poteet this Friday at home. The Mustangs will also be playing at home against Poteet on Friday.
Kicking it off at the varsity level, the Lady Mustangs led a talented Karnes City in the first quarter with Senior Kylie Spangler scoring early points and capitalizing at the free throw line. The Lady Mustangs kept pace with Karnes City for the rest of the first half, going into halftime tied 23-23. The two teams played a close third quarter, and sophomore Lady
Mustang Yahdi Lujan put up a last second three to bring the score to 37-38 and the lead back to the Lady Mustangs with only a quarter left to play. Fourth quarter play was intense and the Lady Mustangs fought hard, but Karnes City pulled away and finished the game 56-64. Spangler led the way for the Lady Mustangs all game, with 20 points, 8 rebounds, and 8 steals.
Stats: Jelli Padilla 9 points, 6 rebounds, 3 steals. Tina Fulton 7 points. Bella Martinez 5 points. McAiyla Ruiz 1 point, 5 rebounds, 3 steals. Lujan 9 points, 3 steals.
By Dicy Chambers/Noah Gilkey