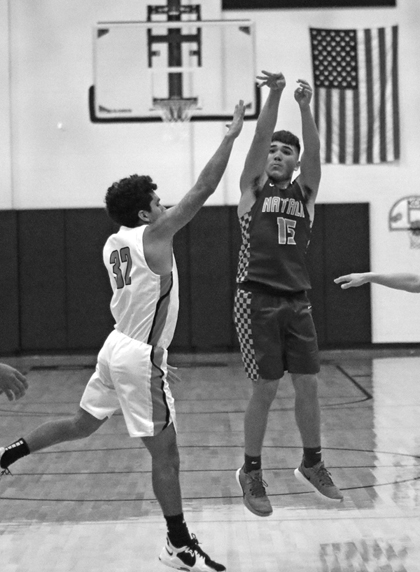 Facing Karnes City on January 4th, the Mustangs played hard but lost. Now 1-5 in district, the Mustangs are set to take on Poteet at home this Friday. Coach Justin Welsh and his team are nearly half way done with district and still have time to improve their spot in the rankings. Currently Poth leads undefeated.
On the men’s side the Mustangs put up a hard fight against the Badgers but unfortunately finished 36-53. The Mustangs held on for the first half against the Badgers, with Junior Joshua San Miguel making a few key drives and Senior Joseph Gonzales putting up good threes to keep the Mustangs in it. By the third quarter the Mustangs were down 15-34, but worked hard to stay in it. The Badgers held on to their lead through the second half, and ultimately came out on top of the Mustangs.
Stats: Paul Zapata 2 assists, 1 steal, 1 block. David Silva 6 points, 3 rebounds, 3 assists, 6 steals. Devin Chapa 2 rebounds, 1 steal. Elias DeLuna 1 point, 5 rebounds, 1 steal, 1 block. Justin Curiel 2 rebounds. David Rodriguez 3 points, 3 rebounds, 1 assist, 4 steals. San Miguel 19 points, 12 rebounds, 1 assist, 1 steal. Gonzales 7 points, 1 rebound, 1 steal. Matthew Martin 2 rebounds.
Miguel led with a double-double, scoring 19 points with 12 rebounds. Gonzalez tallied up 7points.
By Dicy Chambers/Noah Gilkey