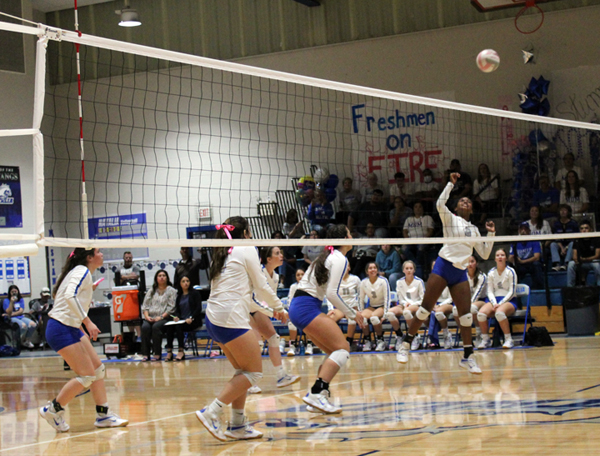 As of Friday night, the Lady Mustangs are holding onto 3rd with just one game left in district and no matter the outcome of any games, the Lady Mustangs will win 3rd.
They faced Poth last night to close out an impressive district season. Bi-District will take place November 1st or 2nd and looks like they will face Industrial who was runner up in District 28. The UIL website will have all the information as soon as district certification is done. It will also have game times and locations.
Honoring their seniors before the game last Tuesday, the Lady Mustangs then took on rivals the Lytle Lady Pirates. As usual it always proves to be a good game. Natalia ‘s hard work all season earned them 3rd place in district as the Lady Mustangs won 25-18, 25-20, and 25-11.
Kylee Spangler 12 kills, 3 blocks. Jelli Padilla 7 kills. McAiyla Ruiz 3 kills, 3 digs. Tommie Gunn 10 assists, 3 aces. Bella Martinez 3 assists, 3 digs. Anaya Jones 5 assists. Tina Fulton 3 assists, 10 digs. Addison Crowther 1 block.
The Wolves came to Natalia on Friday night and the Lady Mustangs sent them home with a 3-0 loss. Dilley is in the bottom half of district standing and will end their season on Tuesday. Natalia played their game as strong as ever and added the win to their 11-4 district record.
Bri Paredes 2 aces. Fulton 1 ace, 15 digs 3 assists. Gunn 1 ace, 16 assists. Padilla 1 ace, 12 kills 14 digs. Jones 10 kills. Isabella Martinez 2 kills, 5 assists. Spangler 2 kills, 1 block. Ruiz 7 digs. Crowther 1 block.
Good Luck to the Lady Mustangs as they make their playoff run!
By Dicy Chambers
Sports Writer