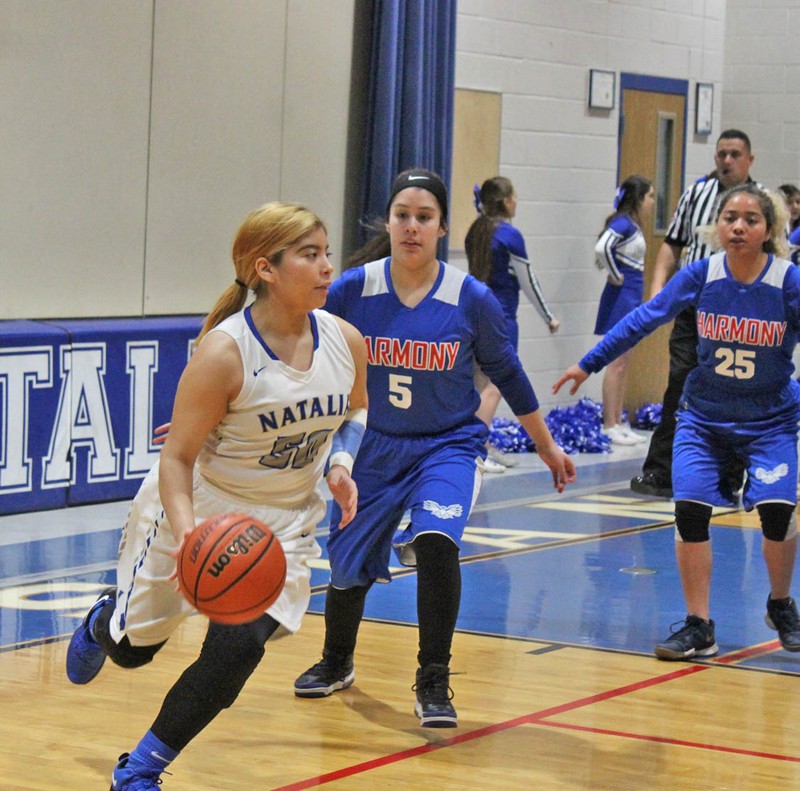 Success comes when a team unites as one and that is what took place when Natalia took the floor versus new district foe Laredo Harmony last week. The girls in blue used the offensive efforts from nine different players, en route to a huge home victory over the border district. Zita Perez and Kaetlyn Corona led the way offensively, as they finished in double digit scoring in Natalia’s 66-15 victory.
“We came out, played well and took care of business,” Coach Doug Lum said when asked about the big win.
Natalia wasted no time setting the tone in their 2nd 30-3A game of the season. Natalia opened with a vengeance, as they outscored Laredo 27-0 in the 1st quarter of play thanks to the offensive efforts of seven different players. Leading the way offensively, was Jelli Padilla (7 points) and Perez who scored 6.
Natalia cooled off a bit offensively as a team, but Perez continued to punish Laredo down-low. She scored six of ten second quarter points leading the girls in blue to a 37-4 lead at the half.
In the second half, Raven Sanchez sparked the girls in blue in the 3rd quarter, as she pitched in a six point effort to compliment a four point effort by Perez. This allowed Natalia to take a solid 52-7 lead into the final quarter of play.
The Lady Stangs finished off Harmony in the 4th outscoring them 14-8, as Kaelyn Lara along with Corona led the offense in the 4th resulting in a solid 66-15 victory.
“We have a tough stretch of games coming up and we will continue to work hard to improve each game,” Lum said.
Scoring Leaders – Perez 16, Corona 10, Sanchez 8, Padilla 7, Mariah Joseph 6, Lara 6, Destiny Zapata 6.
Dilley
The Natalia Lady Mustangs had their eyes set on trying to start off 30-3A 3-0 for the first time in 10+ seasons last Friday night in Frio County. Unfortunately, the Dilley Wolves had plans of their own, which included playing scrappy defense that stymied the Natalia offense throughout the night.
As a result, Dilley was able to hand Natalia a tough 54-27 set-back at DHS.
“Dilley was a tough game,” Coach Doug Lum said. “We did not shoot the ball well at all and they were able to get out in transition in the second half to extend their lead.”
Natalia was limited throughout offensively, especially with their inside game despite holding a slight edge early. The girls in blue used a four point effort by Zita Perez and a bucket from Jelli Padilla to take a 6-4 lead into the 2nd quarter.
Dilley came alive in the second, as they produced a 14 point effort fueling the Lady Wolves to an 18-14 edge at the half.
In the second half, Dilley blasted past the Lady Mustangs, as they outscored the girls in blue 17-8 in the 3rd quarter as Dilley attempted ten free throws compared to just two by the girls in blue. This allowed the Lady Wolves to take a 31-21 lead into the 4th quarter.
The maroon and white were able to finish strong, with a 54-27 victory over Natalia. Destiny Zapata hit a 3-pointer in the quarter, Raven Sanchez a bucket and Perez owned the final two free throws of the game for Natalia.
“We have to go back to work and prepare for the next opponent in line on the schedule,” Lum said.
Scoring Leaders – Perez 10, Padilla 6, Sanchez 6, Zapata 3, Sam Stallworth 2, Kaetlyn Corona 2.
Upcoming Games
Natalia was at home on press night as the Lytle Lady Pirates were in town. This Friday, Natalia faces yet another tough challenge when Coach Doug Lum and the Lady Mustangs return to Lum’s old stomping grounds in Jourdanton to battle the Squaws he once led. The district battle is set for 6:30 p.m. and this is always a good one!
On Tuesday, the second round of 30-3A action begins as the Lady Mustangs travel to LaSalle County to face the Cotulla Cowgirls at 6:30 p.m.
By Eric Smith