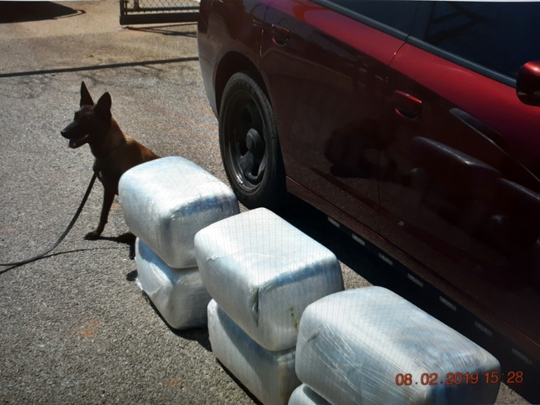 The stop for a traffic violation was made around mile marker 112, about two miles south of Moore. But a K-9 unit quickly picked up the scent of drugs.
“Upon making contact with a 41 year old male out of Laredo, some signs of nervousness and agitation were noticed. The driver seemed agitated about being stopped,” said Frio County Sheriff’s office.
“After the roadside interview was about to end, consent to search was asked and the driver denied consent. K-9 Stryker with the Frio County SO was on site and was utilized on the truck. Stryker alerted to the bed of the truck which had a locked bed cover. The bed cover was opened and several items were in the back bed of the truck. Three large boxes were in the bed and a strong odor of marijuana emitted from them. The boxes were opened and two large bundles wrapped in plastic wrap inside trash bags were inside the large brown boxes. A total of six large bundles were located with a total weight of 161 pounds of marijuana. That has an estimated street value of $154,560.”