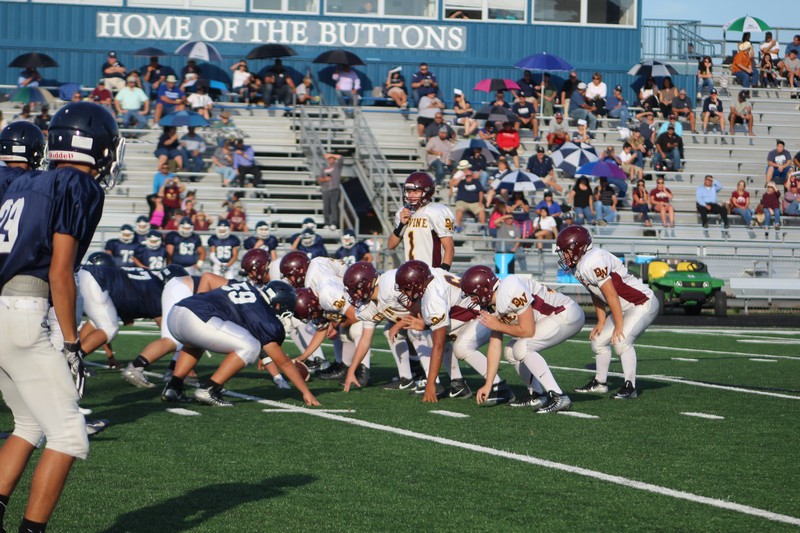 Click here for photos of the JV Warhorses’ win over Central Catholic!

Devine’s JV Warhorse football team won a thrilling ballgame against the Central Catholic Buttons last Thursday evening over in San Antonio. A touchdown pass from quarterback Brady Hackebeil to split end Payton Carr and the ensuing successful two-point conversion by running back Zack Nowicki sealed the deal, putting the final touches on a 22-21 Warhorse victory.
“Carr and Xavier Contreras did a great job of running the football and picking up crucial first downs,” stated Coach Bart Oropeza. “Jared Fernandez had two huge, first down catches. I was very proud of the way our freshman Warhorses responded to adversity. With 5 minutes left in the game, we marched down the field and scored to go ahead. Then, we had to hold them on defense with 2 minutes and 30 seconds left in the game. Once we got the ball back, we still had to fight for one more first down before taking a knee because Central still had all three time outs remaining.”
The Horses got on the board first with an 18-yard completion from Hackebeil to Hunter Reyes. The two connected once again on the two-point conversion pass to put the Warhorses up 8-0 midway through the first quarter.
Central Catholic regained the lead momentarily in the second quarter. Devine stormed back to knot the score at 14 on a 7-yard touchdown run by Hackebeil. The Buttons short-lived fourth quarter lead was quickly extinguished when Hackebeil found receiver Carr in the back end of the end zone. That score pulled the Horses to 21-20 with the all-important two-point play coming up.
That is when Nowicki took the pitch from Hackebeil and went untouched into the end zone to put the Horses up for good at 22-21.
“Although Central scored 21 points yesterday, the defense played great,” stated Coach Juan Gonzalez. “Central Catholic’s success goes to their quarterback who would pick up big yards after being pressured on passing situations. He is a good athlete who can pass and run. The secondary had a few mistakes, but as a whole, we are getting better. Xavier Contreras covered the pass well accounting for one pass breakup, one solo tackle, and one caused fumble. Brady Hackebeil came up with a huge interception late in the game to secure our victory.”
Up next
The Warhorses are off next week but return to action on Thursday, October 11 in Devine against the Hondo Owls. Game time is not set at this time.
By Jerel Beaty
Staff Writer