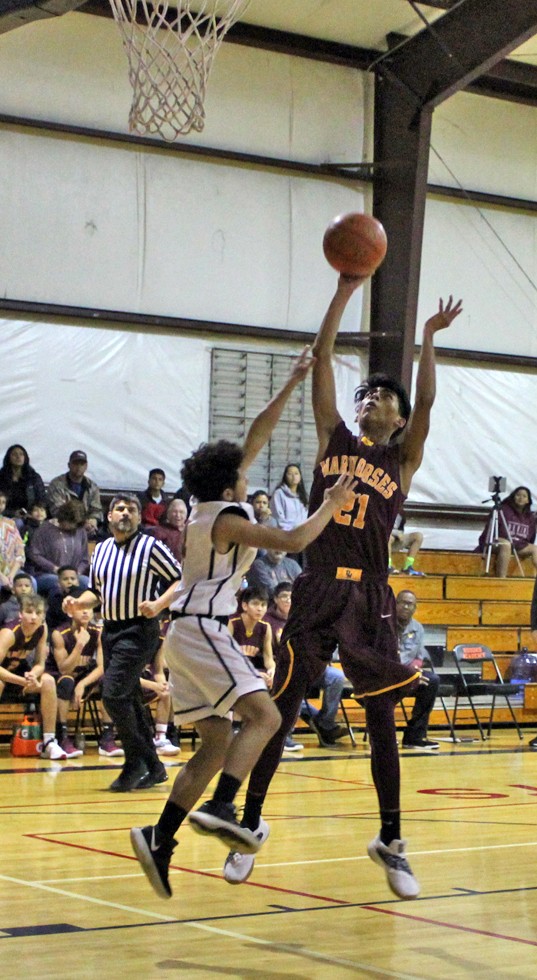 In their first tournament of the season, the JV Warhorses struggled to get the wins. Plagued by injury and illness, the boys are adjusting filling in positions that they normally don’t play. Despite that the team made a great showing at their home tournament and made every opponent work hard. They ended this tournament 1-3.
Facing Marion in their first game, the JV Warhorses won 37-29. “We won our first game of the tournament by playing very good defense and made enough shots to win. Sage Ornelaz was sick and didn’t play in either game. The kids stepped up and pushed on,” said Coach Evan Eads.
Jose Dozal led with 18 points, Matthew Madrid 10, Colin Dishman 5, and Christian Gerlach 4 points. Scores by quarter: Q1 5-4, Q2 16-9, Q3 25-21, Q4 37-29.
Uvalde was a tougher match in their second game on Thursday. The JV were down 18-24 at the half and came back within two points at the end of the third but could not close the last few points in the fourth. “We struggled to score against Uvalde. I did not have enough offense on in-order to get optimal shots. Our kids fought to the end,” said Coach Eads.
Dozal led with 12 points, Madrid 9, Hunter Farias 5, Dishman 4, Weston Byrd 2, and Trace Seguin 1. Scores by quarter: Q1 11-12, Q2 18-24, Q3 28-30, Q4 33-39.
Saturday the JV Warhorses faced Pleasanton first and they lead at the end of the first three quarters but it came down to the last few moments of the game and Pleasanton was able to take the win, 41-44.
Dozal led with 26 points, Madrid 5, Dishman 4, Ornelas 3, Farias and Gerlach with 2 each, and Byrd 1. Scores by quarter: Q1 17-11, Q2 23-18, Q3 32-29, Q4 41-44.
In their final game of the tournament against Medina, the Warhorses took the early lead in the first but could not hold it. Playing hard and not giving up, they made Medina work for their win.
Dozal led with 14 points, Madrid 7, and Dishman, Farias, and Seguin with 2 each. Scores by quarter: Q1 9-8, Q2 16-21, Q3 20-31, Q4 30-46.
In the four games, the JV Warhorses made 46% of their free throws and only had two players foul out.
“We lost both games. We are playing good defense but are struggling to score. We are dealing with some injuries and illness which is affecting the lineup. We will continue to work and get better,” said Coach Eads.
By Dicy Chambers
Sports Writer