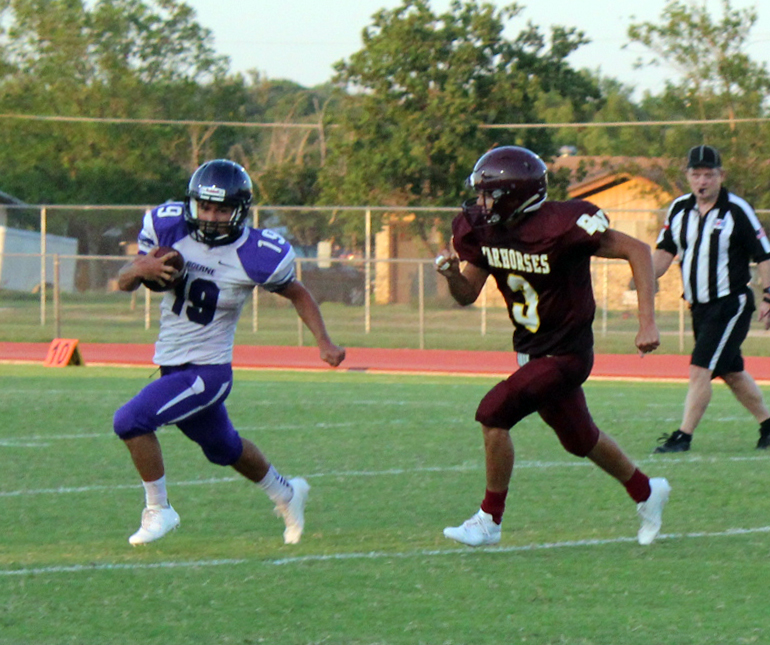 Tristan Kannard and Chad Lawson finally made the Boerne Greyhounds center/quarterback combo pay for all of their bad snaps during last Thursday’s opener for both teams at Warhorse Stadium. After numerous bad snaps throughout the game, Kannard demolished the Boerne quarterback who had just picked up yet another loose ball on the ground. With the ball lying on the field, Lawson made the Greyhounds say ‘cheese’ as he scooped the ball and rambled 55 yards to score the game’s first touchdown around the 6-minute minute mark of the 3rd quarter.
“It was a tough first half offensively but the defense was solid,” stated Scott Taylor. “Joey Seguin made a touchdown saving tackle using pursuit drill angles that we practice every day. In the second half, the defense came up with a couple of turnovers that went for touchdowns.”
Devine’s offense was able to get the ball moving for more yardage in the second half. On the drive after Lawson’s touchdown, the Warhorses marched the ball 56 yards setting up Leonard Pompa’s 36 yard scoring run to make the game 14-0.
The last Warhorse touchdown scored was by defensive back Isaiah Oropeza in the fourth quarter. His 45-yard pick-6 and Donavon Camacho’s 2-pt conversion run gave Devine enough cushion to finish the game and complete the 22-0 shutout victory. Demi Monreal had an interception and broke up several passes while linebackers Sergio Martinez, Leonard Pompa, and Eliseo Perez stopped a lot of Boerne rushing attempts. Mason Perez contained much of the Greyhound outside running game and Kyle Hidalgo stuffed some inside rushing attempts.
The JV is 1-0 on the season and play at Warhorse Stadium on Friday, September 8. Kickoff is set for 5:15 pm.
By Jerel Beaty
Staff Writer