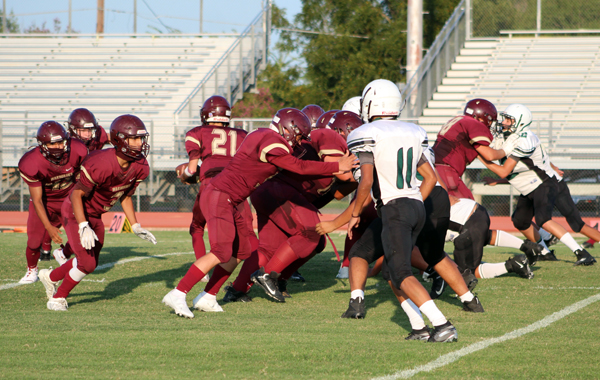 Devine JV bounced back from a heartbreaking loss last week to one group of Eagles to dismantle an entire new group of Eagles. After a walk-off loss a week ago to Pleasanton, the Horses got back on track with a 37-2 dismantling of Luling last Thursday at Warhorse Stadium.
Coach Heath Poppe explained the game and the zany last two minutes of the first half saying, “The game started with an onside kick that we recovered to put us on the 45-yard line. We drove it down the field and fumbled. We lost one scoring opportunity there but our defense forced a punt on Luling’s next possession. We drove it down the field again but went backwards after two more fumbles so we turned it over on downs.”
That was not the crazy part. According to Poppe, “This is where it gets a little hairy. We forced a 4th down and Luling snaps it over the punters head into the end zone for a safety so we are up 2-0. They punt us the ball after the safety with 1:56 left in the 2nd quarter. We then score on a 9-yard run by Iggy Cisneros. Caden Hanson kicks the extra point. With 0:36 seconds left Luling gets a personal foul penalty, which allowed us to kick off from the 45-yard line. We onside kicked it and got it. Two plays later, we score on a 12-yard run by Cisneros with 0:16 still left in the half. We naturally try for the extra point, but they blocked it and returned for their only two points of the game. It went from a 0-0 game to a 15-2 game going into halftime in a matter of 1:56.”
Some people may call that a “crazy” game, but after watching JV football over the last 23 years it actually sounds pretty typical to me. Just sayin’, Pop.
The Horses offensive engine was just warming up, though. Devine took the second half kickoff and five plays later Jonathan Weinkam scored on a 12-yard run. Cisneros added the two-point conversion to boost the lead to 23-2.
Warhorse Samuel Mills intercepted an Eagle pass attempt on Luling’s next possession that set up a 1-yard Hanson touchdown run. Spreading the scoring wealth around, Poppe gave Brandon Martinez the ball for the two-point try, which he successfully completed. Devine was now up 31-2.
The last touchdown by the Warhorses was on a 65-yard run by Sam Guardiola. His fourth quarter score with 9:37 left in the game put the finishing touches on the 37-2 victory.
Devine freshman defensive coordinator Juan Gonzales was understandably ecstatic about the shutout pitched by his unit. With Luling’s only score coming on a returned extra-point attempt, the defense did not allow the visitors to reach the end zone.
“We played well last night,” understated Gonzalez. “We flew around and made plays. Free safety Samuel Mills had a big interception for us while another safety Ryan McClain had a big 4th down pass break up to end the first half.”
The secondary was not the only group to have stand out performances. Gonzalez went on to say, “Linebackers Nick Ortiz, Aaron Saenz, Brandon Martinez, and Johnathan Weinkam along with defensive tackles Kolt Hackebeil, Jacob Delaney, Julian Gonzales, Aaron Bonilla, and Blain Davis did a great job getting our defense lined up. Us being lined up correctly was key to stopping their inside run game. Rovers Luke Friesenhahn and Jack Schneider did a good job containing their outside run game plans.”
Poppe and Gonzalez agreed that all the Warhorses deserved credit for the win. Gonzalez put it best saying, “It was a great team effort all around. Poppe and I are very proud of the work these kids put in every day at practice.”
With Poppe and Gonzalez stressing “team victory,” I thought it only fair to acknowledge other JV players who had a hand in accomplishing the 37-2 blowout.
Those are Isaiah Morin, Camden White, Josiah Martinez, Kristofer Aguirre, Stephen Culver, Diego Gerlach, Elijah Sanchez, Dominique Valerio, Lalo Hernandez, Jacob Costilla, Gabriel Hewtty, Xavier Garza, Wyatt LaFond, Seth DeLeon, Tanner Shields, George Saenz, Adrian Beltran, and Corey Dirck.
By Jerel Beaty
Staff Writer