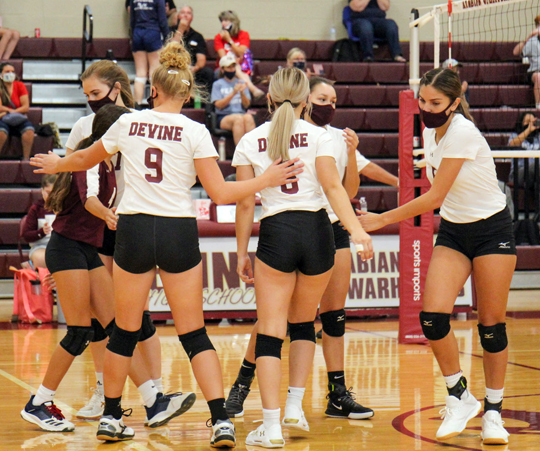 With the rest of the season up the air, the JV Arabians worked hard in their final pre-season game against Feast. They won the first set 25-13 but then struggled to get another win to take the match. They fell 21-25 and 22-25 in sets two and three. “The girls suffered a tough loss to a good Feast team. However, I am very proud of the girls for working together and fighting all the way till the end. Can’t wait for district to start Friday!” Coach Kara Stacy
Kills: Zoe Gonzales 11, Kaitlyn Morales 7, Kate Featherly 1, Brooklyn Miller 8. Assists: Avery Cruz 3, Featherly 24. Digs: Gonzales 1, Karsyn Brown 2, Neenah Guerrero 1, Cruz 8, Morales 2, Featherly 6, Miller 2. Emily Faubel 1. Aces: Guerrero 3, Cruz 1. Blocks: Morales 1, Featherly 1.
In their district opener against Somerset, the Arabians recovered from the Feast loss to win against Somerset 25-18 and 25-13. “I’m proud of the teamwork the girls showed in this game. Some played in positions they aren’t used to and really stepped up to the challenge to help us get our first district win!” Coach Stacy
Kills: Gonzales 7, Brown 1, Morales 4, Featherly 2, Miller 7. Assists: Featherly 11. Digs: Kaylee Romano 1, Morales 1, Miller 1. Aces: Romano 1, Morales 3, Featherly 2, Miller 5.
The Arabian’s schedule will slowly be announced as more schools in their district will be able to start practicing and playing games.
By Dicy Chambers
Sports Writer