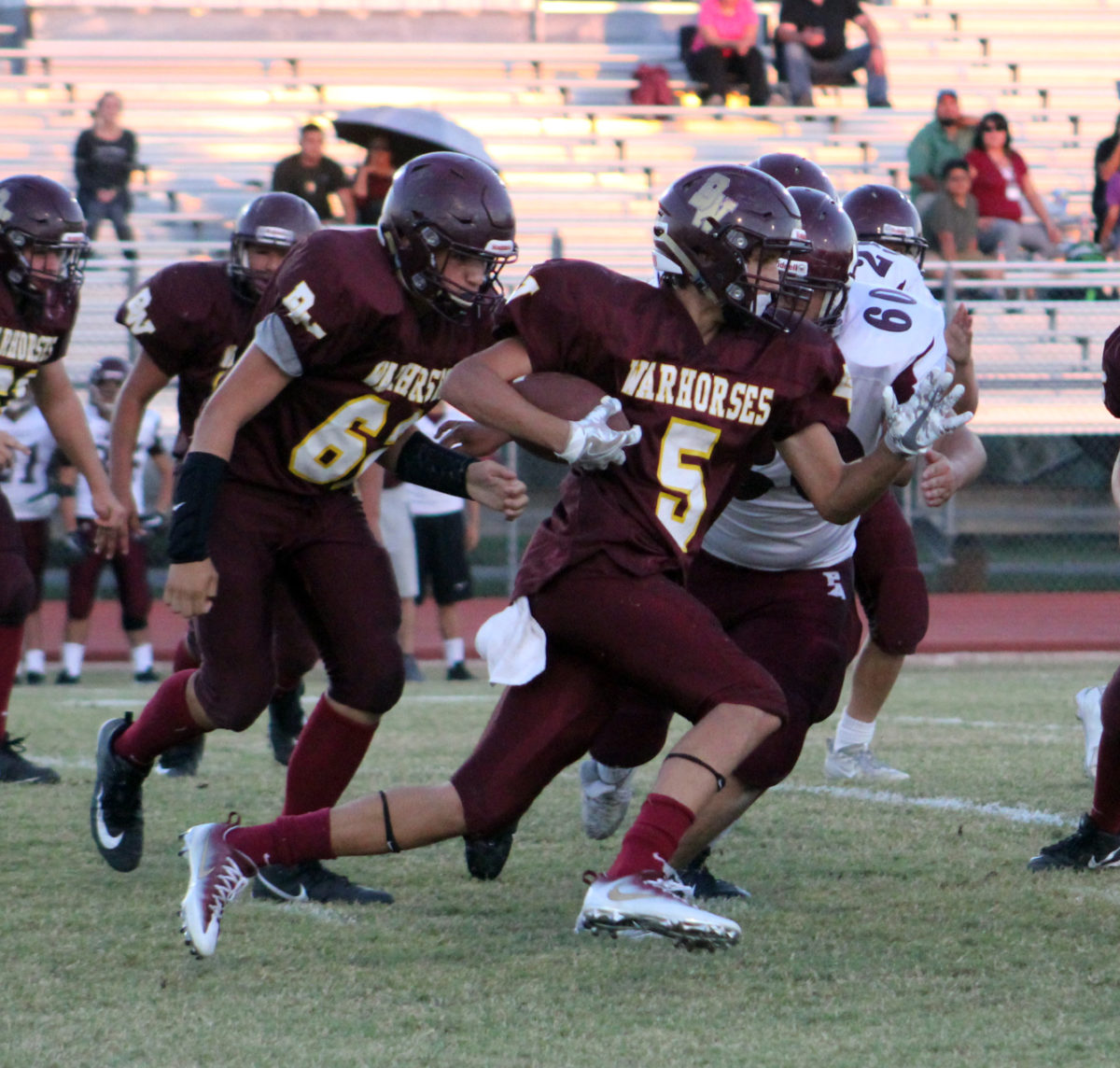 It did not take long for the JV Warhorses to put 8 points on the scoreboard at Warhorse Stadium last Thursday against Poteet. On the first offensive play after Ryan Applewhite returned the opening kickoff to the 30 yard line, Donavon Camacho sprinted 70 yards for the game’s first touchdown with only 21 seconds off the first quarter play clock. The Warhorses tacked on one more touchdown later in the game and went on to win 16-8.
Devine recorded a safety in the second quarter when the Poteet deep snapper sailed the ball over the head of the Aggie punter. After picking up the ball and trying to get out of the end zone, the punter was tackled inside the goal line for two points. Devine now led 10-0.
Defensive back Hunter Maxwell broke up a Poteet 4th down pass attempt to give the Warhorses the ball with 4:35 left in the first half. Quarterback Collin Dishman hit Camacho in stride down the left sideline for the score with only 5 seconds remaining. The Aggies were down 16-0 at halftime.
Things got a little hairy in the second half. With Devine unable to add any additional points, Poteet closed the gap to 16-8 on a 57 yard reverse with 5:27 left in the game. Fortunately for the Warhorses, their defense clamped down the rest of the game to secure the victory.
“Josh Guajardo had a great game with 2 interceptions, Hunter Maxwell provided an important pass break up, Joey Seguin added an interception as well,” stated Defensive Coordinator Scott Taylor. “Joe Mares, Isaiah Rejino, Zach Bocanegra, Cesar Rodriguez, and Lupe Rodriguez did well against the run. Blaine Miller had a great tackle on a 4th down boot-keep that got us the ball back. With all the injuries and people moving to new positions due to the combining of our freshman and JV squads, it was a very good effort.”
“Donavon Camacho continues to run the ball really well for us,” stated Offensive Coordinator Heath Poppe. “He is our go-to back and he always produces when we ask him to do so. Our line blocked well tonight. Dishman is directing the offense just as we coach him to do.”
Coach Lynn Cozby’s o-line has performed admirably throughout the season. Jesus Hernandez, Cesar Rodriguez, Isaiah Rejino, Kyle Hidalgo, Darren Lafferty, Logan Brown, Garrett Carver, and Guadelupe Rodriguez are building a strong foundation for years to come.
The JV is 6-1-1 on the season and play in Pearsall at 5:00pm Thursday night. There is not a freshman game this week.
By Jerel Beaty
Staff Writer