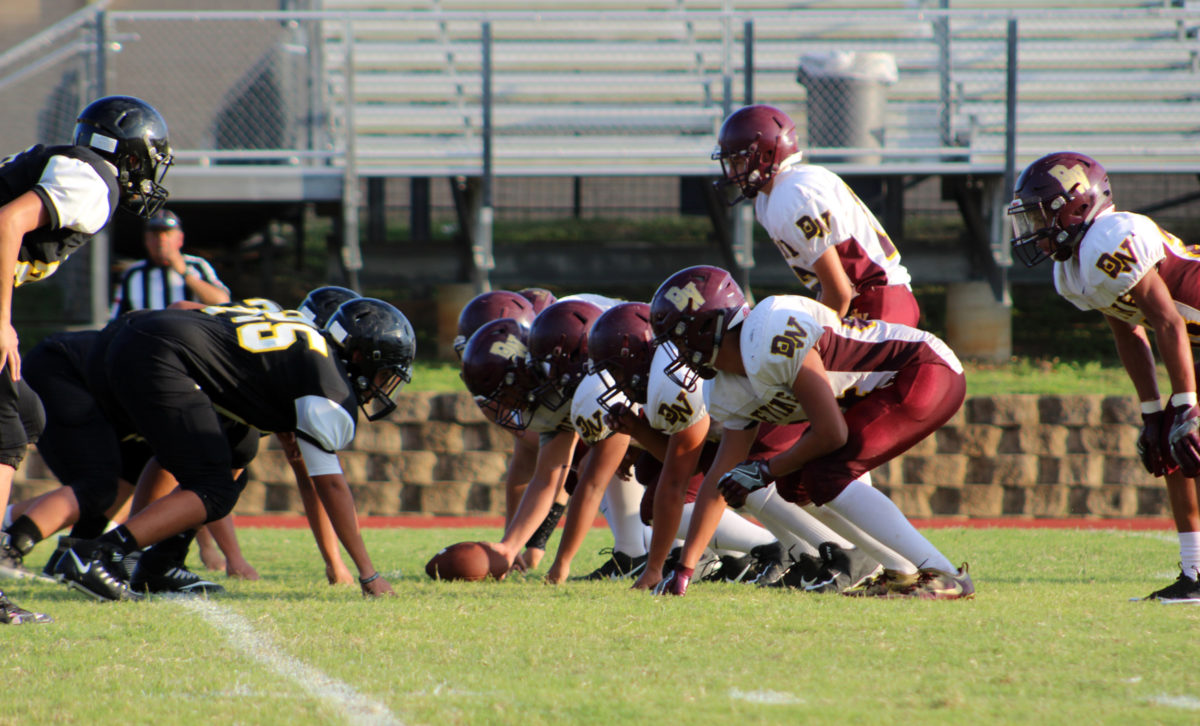 The JV Warhorses opened district play on a positive note by defeating the Pirates in Lytle last Thursday night by the score of 26-7. The offense jumped out to a 20-0 halftime lead before surrendering a score late in the contest.
Deme Monreal used the great blocking by his big guys up front to score three touchdowns on the night. Colin Dishman added another score midway through the fourth quarter to extend Devine’s comfortable lead. Zack Bocanegra, Michael Polanco, John Schnautz, and Isaiah Rejino blocked well throughout the game.
According to Defensive Coordinator Scott Taylor, “Eliseo Perez had two fumble recoveries with one of those caused by Bocanegra. The entire defense played well, only giving up a touchdown late in the fourth when we were up 26. Sergio Martinez had good night kicking off. Lafferty Carver played well up front Maxwell and Joseph Guajardo played well in the secondary.”
Scoring summary:
1st quarter-5:36-Deme Monreal 42-yard run (2pt failed) 6-0.
2nd quarter-7:30-Monreal 43-yard reception from Colin Dishman (2pt failed) 12-0.
2nd quarter-1:48-Monreal 53-yard run (Donavon Camacho 2pt run) 20-0.
4th quarter-4:42-Dishman 6-yard run (2pt failed) 26-0.
4th quarter-1:48-Lytle 6-yard run (kicked PAT) 26-7.
The JV will be back in action next Thursday in Carrizo Springs to take on the Wildcats. Kickoff is set for 5:00 pm.
Freshman
With Lytle not having enough players to field a freshman team, the Warhorse freshman football team traveled to LaPryor and beat the Bulldogs by a final score of 42-20. Information for the game was not provided.
The team will play in Crystal City Thursday, October 19 at 7:00 pm as Carrizo Springs does not have enough players to field a freshman team.
By Jerel Beaty
Staff Writer