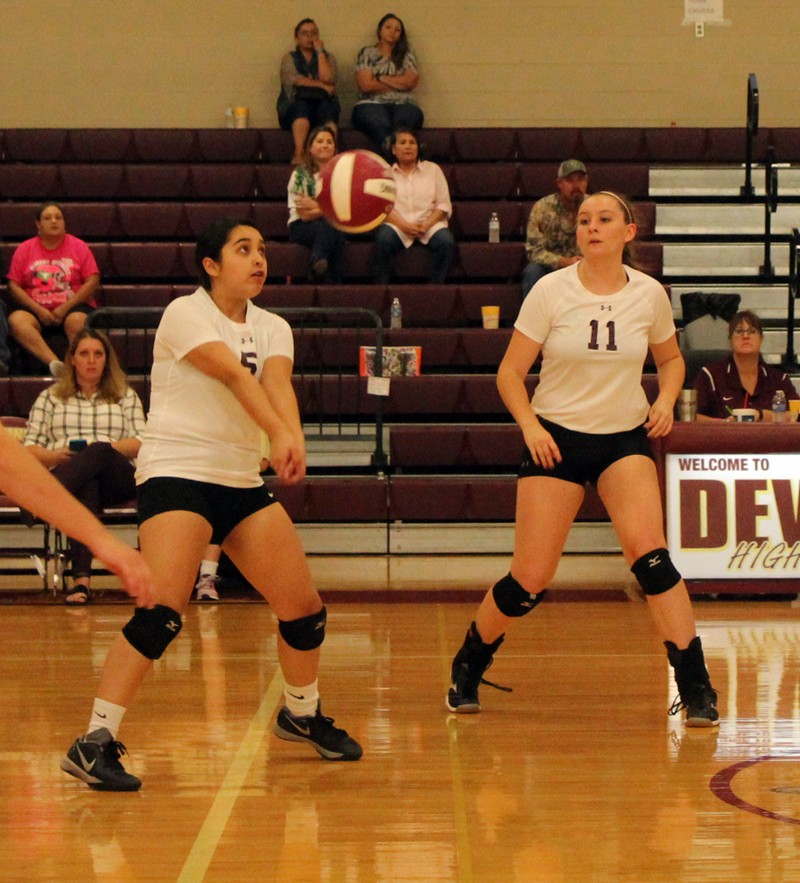 Now in the second half of the district season, the JV Arabians have found their stride with two more wins over Carrizo Springs and Hondo making their district record 5-1 and overall season record 9-8.
The Arabians won their first set against Carrizo Springs 25-16 and then had to work hard in the second when the Wild Cats fought back with their claws out. The final score was 28-16 with the W going to Devine. “This was a good win for us as our serving won this game. We did an excellent job on serving aggressively and this confidence translated into defense and offense,” said Coach Megan Perez.
Myla Miles and Destiny Morales served 4 aces each, Brooke DuBose and Alyson Taylor 3 each, Allison Stevens 2, and Janae Wofford 1. Sydnie Harrell led with 3 kills, followed by Kennedy Duncan 2, Kenzie Schneider, Wofford, and Taylor with 1 each.
Friday night was another huge game for the JV Arabians when they faced Hondo for the second time this season. Having lost to them last month, the Arabians were not going to let them repeat that and after two sets, the Arabians won 25-12 and 25-22.
“I am extremely proud with this win against Hondo! They have met my expectations in every aspect of the game; all the skills we have been practicing this year shined brightly in this win. I am very excited for the next few games and plan to finish the year on a winning streak! – Coach Perez
Taylor had 5 aces, Wofford, Harrell, DuBose, and Miles with 1 each. Harrell led with 3 kills, followed by Taylor, Wofford, and Duncan with 2 each and Halle Hagdorn and Isellia Gutierrez with 1 each.
With only two games left, the JV Arabians are on track for a winning season. The Arabians will face Crystal City on October 19th and Pearsall on October 23rd.
By Dicy Chambers
Sports Writer