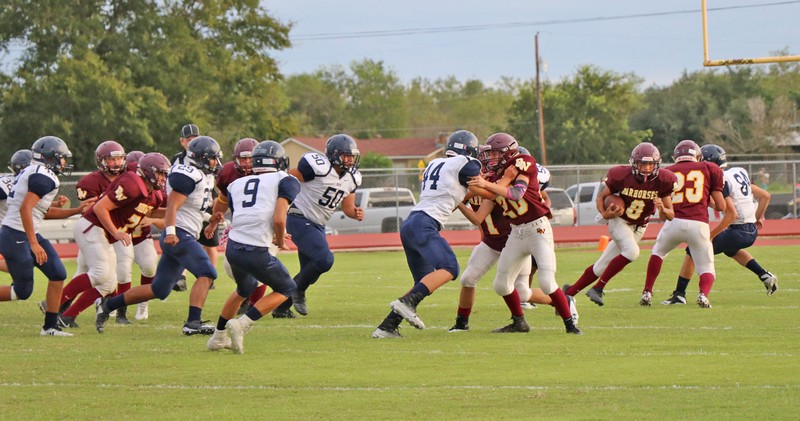 With an all-freshman squad taking on a mostly JV team from Hondo at Warhorse Stadium last Thursday evening, the odds of winning were stacked against the young Warhorses who were taking on a more veteran Owl team. Until a Hondo touchdown pass completion on a 4th and 13 with only a few ticks left on the clock, the upset seemed as though it was going to happen. Hondo won 30-28.
“Brady Hackebeil had three rushing touchdowns and one on a pass to Riley Barton,” stated Coach Bart Oropeza. “Xavier Contreras had two two-point conversions as well but it wasn’t enough in the end. Hackebeil, Contreras, and Zack Nowicki ran the ball extremely tough picking many first downs rushing behind our offensive line. Our boys fought a tough battle and it was a very intense game with both team trading the lead throughout the entire game. I have no doubt that our Warhorses left everything on field last Thursday night. We will continue to work hard and prepare for this week’s game against Crystal City.”
Devine faces the Javelinas in Crystal City Thursday at 6:00pm.
By Jerel Beaty
Staff Writer