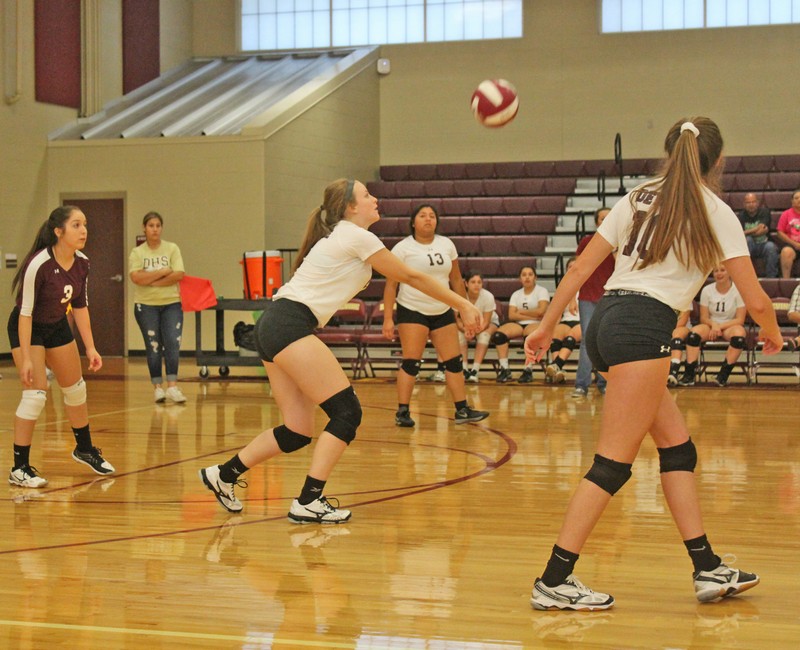 Click here for photos of the JV Arabians’ win over Pearsall!

The Junior Varsity Arabians played two impressive games last week, beating both Crystal City and Pearsall. The Arabians traveled down to Crystal City Tuesday night and beat them in two sets 25-6 and 25-13.“We did a good job this game with working on some details and little tweaks trying to fix this season. We came out strong and focused, ready to play,” stated Coach Megan Perez.
Alyson Taylor led with 5 aces, Allison Stevens 4, Brooke DuBose 3, and Destiny Morales 1. Taylor had 4 kills, Halle Hagdorn 3, Sydnie Harrell and Isellia Gutierrez with 2 each.
Pearsall was a tougher opponent but the Arabians came away with the win after two close sets, 25-21 and 26-24. “Although this was a close game, I was pleased with how we finished. We kept the energy and intensity high which helps us overall play better volleyball. We will continue to keep this place and keep improving for the next half of district,” said Coach Perez.
Janae Wofford and Taylor led with 5 kills each, followed by Hagdorn 4, Duncan 3, Harrell 2, and Stevens and Heidi McLaughlin with 1 each. Hagdorn and Taylor each had a block. Stevens had 4 aces, McLaughlin 2, DuBose, Wofford, and Myla Miles with 1 each.
With the hard work the Arabians put in during practice, they keep improving each game. The JV Arabians only have three district games left, Hondo on Friday, Crystal City on October 19th and Pearsall on October 23rd. They will face Holy Cross on October 16th. Their record stands at 3-1 for district and 7-8 overall.
By Dicy Chambers
Sports Writer