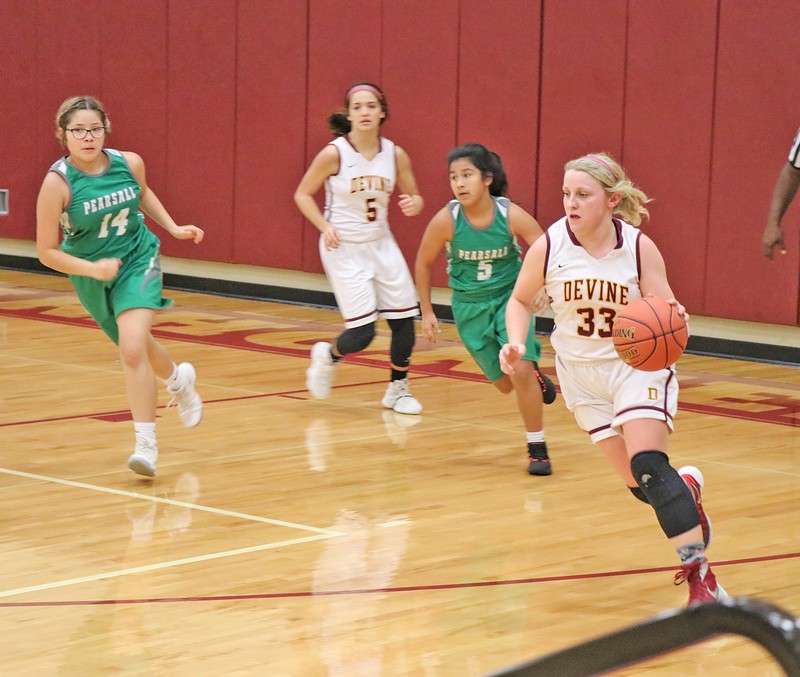 Crystal City
In another aggressive game, the JV Arabians won against Crystal City. “We started off slow in the game but picked up our intensity and defensive pressure in the second half. The JV girls never stopped fighting and we came out with a good win over Crystal City outscoring them 14 to 3 in the fourth quarter,” stated Coach Thompson.
It was tight in the beginning of the game with the first quarter ending 9-8, but the Arabians woke up and played hard in the second to extend their lead to 18-12 by the half. In the third quarter, the Arabians struggled with Crystal City making their shots and outscoring Devine 16-12, the Arabians put the defensive pressure back on in the fourth for the 44-31.
McKenzie McClellen scored 10 points, Brianna Bowyer 9, Jojo Villanueva and Janae Wofford 6 each, Analea Brooks 4, and Pauline Calame 2. Their overall record is now 15-6 and 2-1 in district.
Carrizo Springs
On January 8th, the JV Arabians hosted Carrizo Springs at home and after a quick start, the Arabians took the lead early. Their quick defense forced turn-overs and frustrated Carrizo Springs. Leading 10-3 at the end of the first quarter, the Arabians outscored Carrizo Springs 14-0 in the second quarter. The third quarter was the JV team’s slowest quarter when they only scored 4 and held Carrizo to only 4 points. The Arabians picked up their pace and aggression in the fourth quarter but Carrizo outscored them 14-13 in a comeback attempt. The Arabian were still too far ahead at the final buzzer for the win at 41-21.
“After a tough loss to Hondo, the Devine JV girls bounced back to get a great win against Carrizo Springs. On a more exciting note everyone on the team scored in the game,” said Coach Hannah Thompson.
Briana Bowyer scored 11 points, McKenzie 10, Janae Wofford 6, Analea Brooks 5, Jojo Villenueva 4, Baleria Arana 3, and Pauline Calame 2 points.
Pearsall
JV Arabians have worked extremely hard to end the first half of district 3-1 after coming from behind to beat Pearsall. Trailing 4-13 at the end of the first quarter and 10-18 at the half, the Arabians knew they had to come out more aggressive and with a stronger defense if they didn’t want to lose to Pearsall. Stopping every Lady Maverick offense attempt and tying the game up in the third was part of the comeback that lead to the Arabians winning by 2 at 27-25. It was an exciting final quarter with both teams playing hard for the win.
“We had a slow start in the first quarter but we never gave up. We ended up winning the game by 2 points. The girls executed plays very well and finished off strong. The girls continue to work hard in practice and are excited for the second round of district,” said Coach Thompson.
Janae Wofford led with 10 points, Analea Brooks 7, Kendal Marke 4, and Brianna Bowyer, Jojo Villanueva, and Kaydi Yeats with 2 each.
By Dicy Chambers
Sports Writer