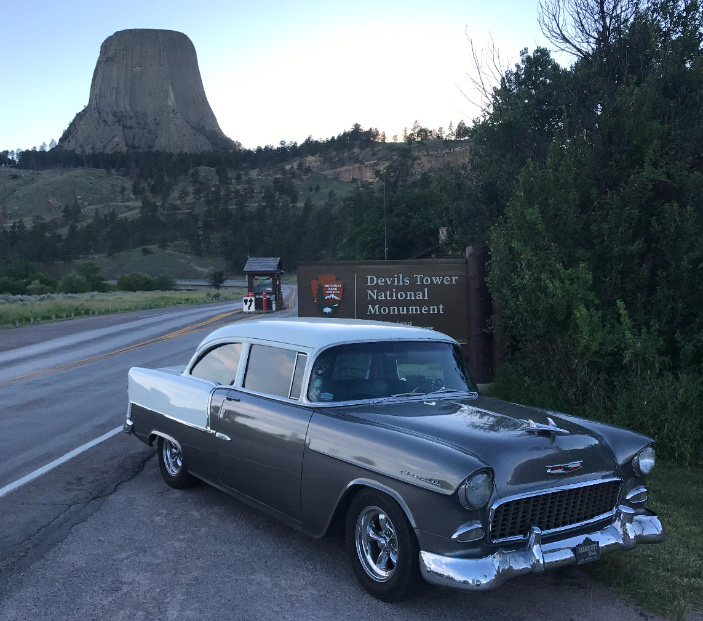 Jody Ornelas has just finished another classic car road trip and has now completed driving through all lower 48 states, as well as British Columbia and Ontario, Canada. “For me,” Jody says, “this was a Bucket-List Goal.” He adds, “In the words of Dinah Shore, I got to ‘See the USA in my Chevrolet’.” Jody has traveled in his 1954 Chevy 3100 Truck and his 1955 Chevy 210 Sedan “from Texas to Canada and from the Atlantic to the Pacific.” Clearly, he loves both his classic cars and traveling the USA. He states, “I have had so much fun driving around the country and meeting great folks throughout.”
Cruisin’ the Boulevard – Petaluma’s Salute to American Graffiti, stands out as one of Jody’s favorite classic car shows. This show is held in historic Petaluma, where most of the iconic scenes from American Graffiti were filmed. It is an all-volunteer, non-profit event held by the California Public Benefit Corporation, founded in 2005 by a group of classic car and American Graffiti enthusiasts to pay tribute to the American Graffiti film and to the “Happy Days” era. Profits are invested back into the Petaluma community. Jody is excited to share that at this show he met Bo Hopkins, Candy Clark, and Lynne Stewart from the movie, and that everyone was amazed that he had driven all the way out from Texas to attend. “I got big rounds of applause when introduced by the DJ as driving from Texas,” he says. And he adds. “This year, I got to go to dinner with Bo, and it was something to hear Bo tell stories of hanging out with his buddies – Steve McQueen and Lee Marvin! I also got to tag along with the American Graffiti cars to the Frances Ford Coppola Winery for a photo shoot.”
Jody proudly lists other famous people he has met in his classic road trips: Bowzer (Sha-Na-Na), Danny Koker (Counts Kustoms TV show), Courtney Hansen (Hot Rod TV personality), Mike Brewer (Wheeler Dealers TV show), Gallagher (Comedian), Dave Kindig and KevDogg (Bitchin’ Rides TV Show), Cristy Lee (Hot Rod TV personality)….Plus, “I’ve gotten to see performances by the Beach Boys, Jerry Lee Lewis, Bill Medley, Paul Revere & The Raiders, The Platters, and a few others while on various Hot Rod tours and/or events.”
En route, Jody has been able to enjoy some of America’s most scenic vistas. His favorite ones are Glacier National Park, Grand Teton National Park, and the Pacific Coast Highway. He explains that as a kid, the Rocky Mountains have been a big part of his vacations. Now days, he finds driving through and taking pictures with his classics and the backdrop of snow-covered mountains to be special, and those settings also made for good pictures for tourists to take. Add more photos taken of his classics at Old Faithfull in Yellowstone National Park “with buffalo roaming the foothills,” and those of amazing mountain and ocean views while driving along the California coast, “receiving ‘thumbs up’ and smiles while listening to the sounds of Motown!”
Other remarkable sights that Jody has enjoyed include the natural wonders of the Grand Canyon and Niagara Falls. In the historical vein, he reflects on the poignancy of Plymouth Rock, Gettysburg, the White House, the Washington Monument, and the Liberty Bell. He elaborates, “American history has always been interesting to me, and visiting these iconic places ‘in Detroit’s finest’ made it even better. To be at the ‘Landing Place of the Pilgrims’ was truly inspiring and made me think of being on deck of the Mayflower in 1620.” And he found “overlooking the battlefields of Gettysburg, imagining the soldiers of the North and South, [hearing] the barrage of cannon fire, and [contemplating] how it affected so many families” to be a sobering experience. Jody also visited some famous prisons, including “what some of my friends referred to as the ‘Prison Tour’ – Alcatraz, Folsom, and San Quentin.”
By far, Jody found his favorite highway to be Route 66 – The Mother Road! He elaborates, “I love finding places from the 50’s like old diners, drive-ins, and hotels.” He adds, “Cruising the Mother Road always puts a smile on my face, be it from an old Mobil Pegasus sign to enjoying a burger and fries with a Route 66 Root Beer at one of the few remaining diners.” Jody reflects on the fact that products of the 50s era were made with innovation and style. Then he says, whimsically, “There is nothing like looking through the windshield past your hood bird and seeing the relic of what used to be a mighty neon-laced teepee hotel.” And in that nostalgic mood, Jody likes to imagine “what these places were like in their heyday.”
What’s next? Jody affirms that his plan is “to continue cruising, seeing more of the countryside and returning to some of these places and shows to visit new and old friends.”