…IRMA BECOMES A CATEGORY 3 HURRICANE OVER THE EASTERN ATLANTIC… 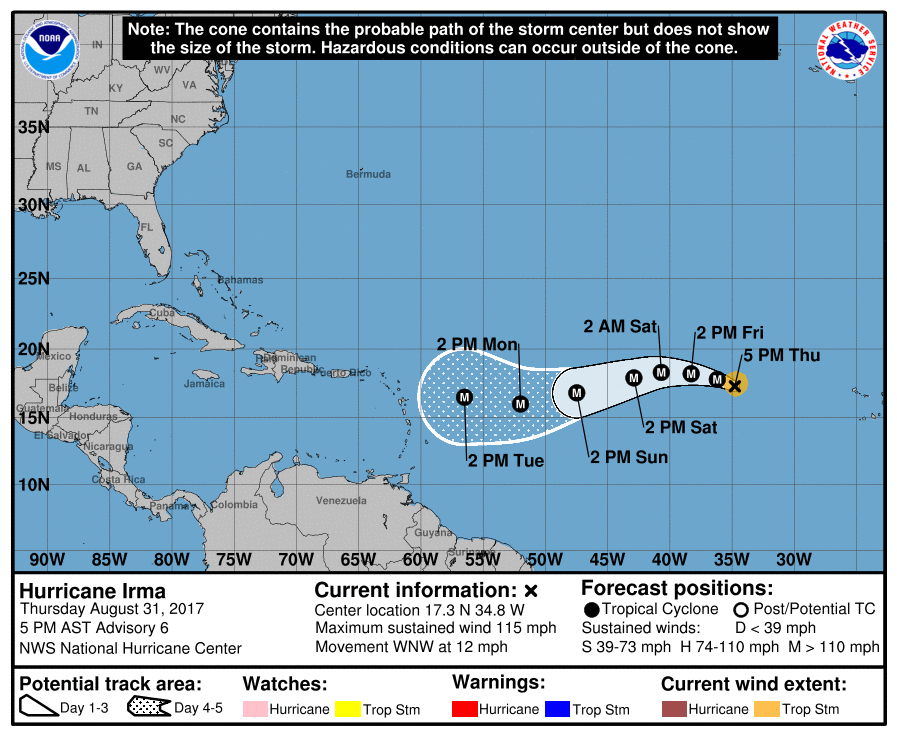 August 31–National Weather Service reports Irma has become a Category 3 Hurricane over the Eastern Atlantic, but there are no coastal watches or warnings in effect as of today, Thursday, August 31.

As of 5 pm yesterday, August 30, Irma was located about 2,000 miles east of the Leeward Islands and about 3,000 miles southeast of Miami.  National media notes, it does not currently pose an immediate threat to US land and it is too early to know it’s track.

The following is a National Weather Service update at 5:00 PM AST Thursday, Aug 31 2017 regarding Hurricane Irma:

Irma has become an impressive hurricane with intense eyewall convection surrounding a small eye.  Satellite estimates continue to rapidly rise, and the Dvorak classifications from both TAFB & SAB support an initial wind speed of 100 kt.  This is a remarkable 50-ktincrease from yesterday at this time.

There are no coastal watches or warnings in effect.

expected to continue today, followed by a westward turn on Saturday,

and a west-southwestward motion by Sunday.

with higher gusts.  Irma is a category 3 hurricane on the

both up and down, are possible, but Irma is expected to remain a