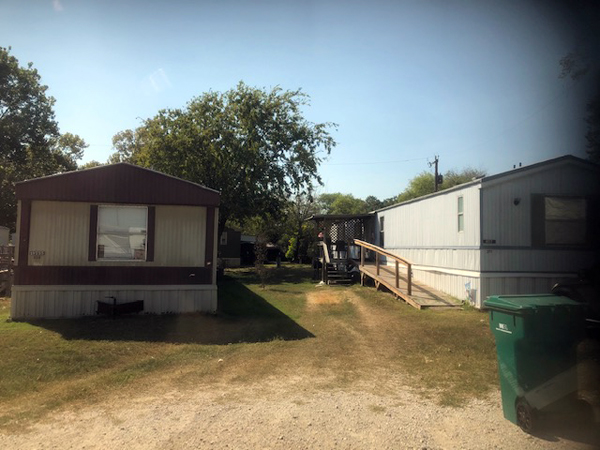 Higher tax valuations at a Lytle mobile home park are threatening to make affordable housing less affordable.
From 2017 to 2019, the Atascosa Central Appraisal District (ACAD) raised property values 38.3 percent on 119 homes at Harris Park, resulting in a commensurate increase in property taxes.
Hefty increases are not unheard of in amenity-rich residential neighborhoods where brick-and-mortar homes are built for the long run. But park owner George Harris contends that mobile homes do not appreciate in value. More like cars than houses, they have shorter life spans and steadily depreciate over time.
Harris, who formerly chaired the ACAD Board for 11 years and is a certified mobile home appraiser, did his own calculations. He came up with a total taxable value of $624,000 for the units in his park — less than half of ACAD’s 2019 figure. (ACAD’s final 2020 totals for the park were not available.)
Harris said he had no success getting ACAD to lower its appraisals, while he noted that the cost of appeals is prohibitive – a $500 deposit is required on each protested property.

“We don’t object to paying taxes. We have a problem paying an unfair amount,” he told the Devine News in an interview. Over the past five years, Harris said he has seen a trend of sharply higher appraisals, which have pushed taxes higher.
Illustrating the predicament that he, his family and, ultimately, their tenants face, Harris points to a 15-year-old rental unit at his park. Purchased for $6,000, ACAD appraised it at $5,520 in 2015.
Then, in 2016, its value shot up to $12,130. This year the county appraised it at $16,780, even though no improvements were made to the residence.
ACAD officials note, correctly, that the price of mobile homes has increased in recent years. But that’s for new units, not aging ones. And Harris Park, which opened in 1972, is full of units that are 20 years old or older.
With no community clubhouse, sports courts or swimming pool, Harris Park remains affordable for young families and retirees. For now.
Each mobile home, whether privately owned or rented, pays a $250 monthly lot fee. Rents range up to $700 for a double-wide, though there are very few of those.
Harris has raised rents, typically as vacancies occur. “We never go up more than $25 at a time,” he said. But the continued onslaught of taxes virtually ensures bigger and more frequent rent hikes.
Other parks are in a similar bind. Thirty minutes to the east, the Rustic Oaks mobile home park in southern Bexar County suffered a similar tax hit.
Manager Jennifer Pinter said Rustic Oaks’ appraisal jumped from $885,000 in 2017 to $1,195,000 this year. So the park’s owner, a Houston company with other mobile home communities around Texas, hired a tax reduction specialist.
“He got [Bexar appraisers] to come down a measly couple thousand dollars [on value],” Pinter related. She said a real-estate attorney has been retained to press the park’s protest.
Rustic Oaks’ rents run between $725 and $900 a month – generally under what a two-bedroom apartment might cost in the area. But, as with Harris Park, those affordable rates may be going up due to ever-rising tax bills driven by higher appraisals.
Despite the crunch of escalating taxes – or perhaps because of its even greater effect on pricier properties — mobile homes are increasingly popular in Atascosa County.
Listed at 4,400 a few years ago, the number of mobile homes in the county now stands at 7,265 units, according to the Texas Department of Housing and Community Affairs (TDHCA). Medina County has 6,126 mobile homes, the agency says.
Most of the area’s mobile homes are not in mobile home parks, but on individual parcels of land.
For accurate, market-based appraisals, Harris says appraisal districts should be comparing mobile homes in parks, not those on open countryside acreage.
On a related note, he counters claims that appraisal districts are not always privy to sales documents. But mobile home communities are required to file a monthly Retail Manufactured Housing Inventory Tax Statement with the county tax office and appraisal district, listing sale prices.
(See ACAD Chief Appraiser Michelle Berdeaux’s responses in accompanying article).

The ACAD website states that the mission of the district’s office “is to courteously and efficiently serve the citizens, property owners and taxing units of Atascosa County by timely producing an accurate, complete, and equitable appraisal roll.”
Equity is a crucial, and contestable, component in property appraisals. Among 65 Harris Park units reviewed by the News, ACAD modestly lowered values on 20 while raising values on 45 from 2018 to 2019.
A 3-bedroom, 2-bath unit is currently appraised by the county at $26,200, far exceeding its purchase price from five years ago. Harris sets the value at $14,000.
In one of its biggest reductions at the park, ACAD knocked $3,200 off the value of a 24-year-old, 4-bedroom, 2-bath mobile home. But based on its vintage, Harris asserts that the $15,660 appraisal remains inflated; he estimates the value at $9,000.
Meantime, the county jacking up its appraisal on a 25-year-old 3/2 unit to $20,960 – a whopping 86 percent since 2017. Harris, who said no improvements had been made on the domicile during that time span, calculated its current value at $6,000.
“I’d like to run a pristine park, but the taxes won’t let me,” he says.
By Kenric Ward
Reporter