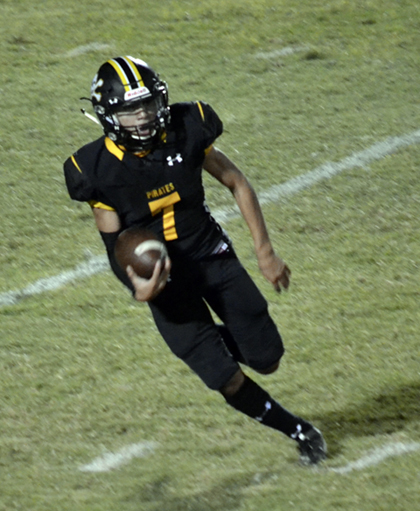 The Lytle Pirates played their second district game of the 2020 season against the Marion Bulldogs. Pregame festivities included honoring the senior band members and the Pirate cheerleaders. Also, long time Pirate band director Mark Fender and his wife Robyn were honored for their many years of service to Lytle ISD. This year marks the 30th and last year of service for Mr. Fender. He will surely be missed.
Lytle kicked off to start the game. The first quarter was a scoreless defensive game as the Pirate defense stopped Marion each time the Bulldogs possessed the ball, including stopping the Bulldogs on a fourth down attempt on the Lytle 37-yard line. Toward the end of the first quarter, Lytle drove to the Marion 25-yard line, but a pass interception ended the drive.

The Pirate defense again held the Bulldogs in the second quarter. Pirate Cort Haltom batted down a Bulldog pass on a fourth down attempt. Later in the quarter Pirate Zakry Placido broke up a pass. With 1:25 remaining in the first half, Pirate Malakai Castro intercepted a Marion pass and returned it 28 yards. Lytle took advantage of Castro’s play and scored on a 23-yard pass from Carson Aldrige to Zakry Placido with 28 seconds remaining in the first half. The PAT by Jason Vega was successful giving the Pirates a 7-0 lead at the half.
After a wonderful half-time performance by the Pirate band and color guard, Lytle received the second half kickoff. Once again, the Pirate defense stopped Marion. However, the Bulldogs rose up to stop the Pirates on a fourth down attempt on the Marion 42-yard line. Marion scored the game tying touchdown at the 3:59 mark of the quarter on a 1-yard run. The PAT was good bringing the score to Marion 14, Lytle 7 at the end of the third quarter.
In the fourth quarter, Lytle drove into Marion territory, but a Pirate fourth down pass attempt was incomplete at the Marion 38-yard line.
Lytle survived a phantom pass defensive call with the Pirate defense stopping the Bulldogs on the Pirate 29-yard line. The Lytle drive was short lived as Marion intercepted a Pirate pass on the Lytle 22-yard line. The Bulldogs quickly scored on a 22-yard TD pass. The PAT hit the left upright leaving the score Marion 20, Lytle 7 with 2:41 remaining in the game.
Lytle came up short on their next drive and Marion took over on the Pirate 19-yard line. The Bulldogs scored on a 2-yard run despite a strong effort by the Pirates. The PAT was good this time ending the game with the final score Marion 27, Lytle 7.
Carson Aldrige led the passing attack for the Pirate with Zakry Placido his favorite target. Malakai Castro had a 38-yard run to pace the running attack along with strong runs by Mark Cantu, Vincent Casanova, Justin DeLeon and Albert Aguilar.
The Pirate defense put up a stout effort, especially in the first half. The leading tacklers for the Pirates were Rylan Wagner, Albert Aguilar, Cort Haltom, and Malakai Castro. Hats off to the Pirate defensive front players, Roberson Harold, Kasen Boyd, Kody Villarreal, Jonathon Cantu, Diego Garcia-Hernandez, Brenham Sevier, Ivan Reyna and Sebastian Flores.
The Pirates will celebrate Homecoming against the Randolph Rohawks Friday, October 9th. Hope to see you there.
By Bill Herring