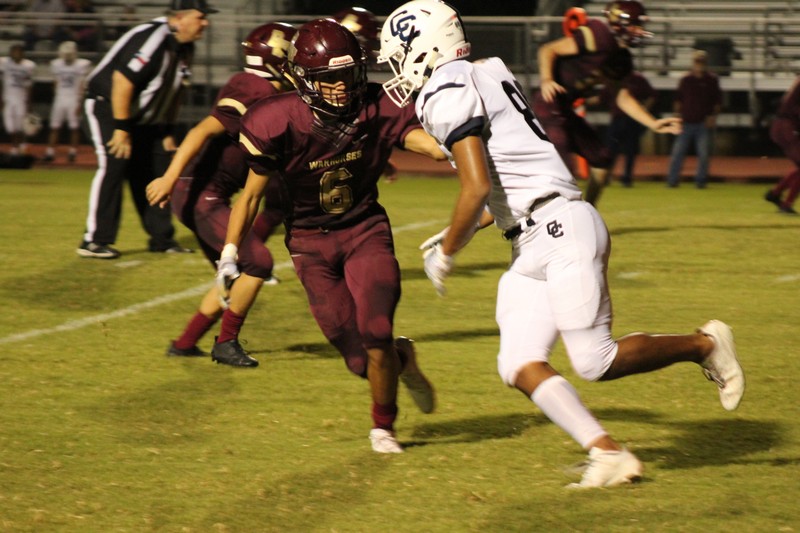 “What a great atmosphere we had Friday night at Warhorse Stadium,” stated Head Coach Paul Gomez. “It was two good teams playing their hearts out. Unfortunately, for Devine players, fans, and coaches, we came out on the wrong end of the 14-13 outcome.
I felt our intensity and focus was the best we have had all year. Our kids definitely came to play. Of course, the glaring thing that we need to fix is the turnovers that cost us scoring opportunities. We cannot have that and expect to win against good teams like Central Catholic.
With this week our off week we are going to go back to working on fundamentals and ball security drills being a big emphasis.
This week allows us to get back to the basics at each position both offensively and defensively. We will have additional individual time at each position during our week off to turn our weaknesses into strengths. Naturally, we will also work on our conditioning.
We start district with a bang as we play Hondo for the first district ball game. I thought we played our best defensive game to date. Coach Villa had a good game plan against a potent offense that came into the game with good offensive stats. Our kids bought in to the play and executed it well. Our defense played with a lot of intensity and they were fun to watch. I think that was a good sign heading in to district.
Offensively Coach PJ Wells called a good game. We just have to eliminate the turnovers. We missed two scoring opportunities in the first half, one due to a fumble deep in their territory and another by what appeared to be a great catch by Guido at their five-yard line that the referee claimed that he was out of bounds. I have watched that play about 20 times and it looks like a 100% catch to me. He even had both feet in bounds. Those things happen as nobody is perfect but I think our boys did a good job of staying focused and not letting those things get to them.
Guido made an awesome play with his speed to score with 52 seconds left to play in the game. We had some great blocking on that play and then Guido just turned on the jets.
I knew our kids had battled all night long and I just felt like going for the two-point conversion and the win was the right call. I felt with the momentum of that play by Guido, that we could make three yards to win the game.
With Grant Collins being hurt, our kicking game has suffered quite a bit. Although Sergio Martinez has been getting a lot better kicking field goals, we just thought that having Chad running the ball was our best chance in that particular situation. I knew their defense would key on Guido on that play.
We have a lot of confidence in Chad Lawson as well. He gave a great effort on his run but came up a few inches short. I am proud of our boys as they left it all on the field.
We hope to get Donovan Camacho and Leonard Pompa back for the Hondo game, which if we do, will be a big boost for our entire team. Unfortunately, Justin Contreras is still three weeks away from returning from a foot fracture.
Xsavior Martinez should be able to come back in two weeks and we hope to hear good news on Isaiah Rejino and Lupe Rodriguez this week as far as their return to action. Our focus now is on a gold ball and we will be ready to go.”
By Jerel Beaty
Staff Writer