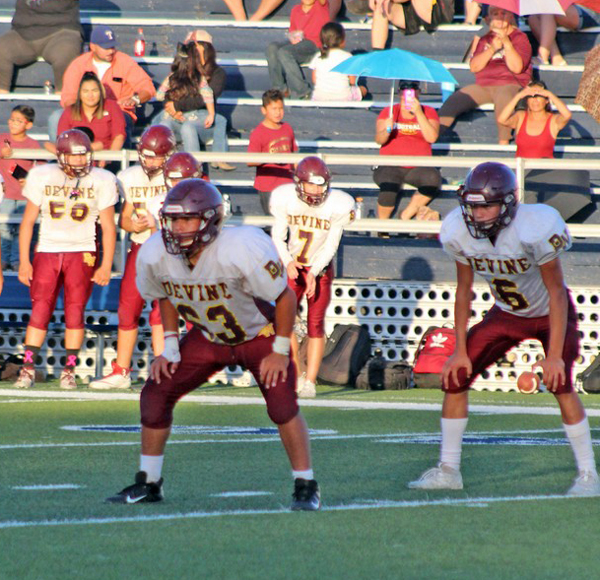 The freshman Warhorses took total control of the second half of the ballgame last Thursday, outscoring the Hondo Owls thirty-one to zilch after being tied at 22 going into intermission. Devine came up with big turnovers at the most important time of the ballgame to start their district season at 1-0.
“Even though we fell behind early in the game, I was very proud of the boys for keeping their composure and fighting tooth and nail to tie-up the game right before the half,” said offensive play caller Coach Bart Oropeza. “The score was 22 to 22 when we came out to kick-off to Hondo in the second half of the game. Our defense did an excellent job of getting us back on offense fast. After that, it was all Devine for the rest of the night.”
All Devine it was, without a doubt.
“Our offense ended scoring 31 more points in the second half of this highly anticipated annual matchup,” Oropeza continued. “A 10-yard pass from Jaiden Burford to Camden White is how we scored our first touchdown. Burford scored our second touchdown by way of a 7-yard run. Marcus Rodriguez punched in the 2-point conversion to finish this drive. Iggy Cisneros scored our third touchdown, also on a 7-yard run. Marcus scored the 2-point conversion once again. Burford scored the fourth touchdown on a 15-yard run and Marcus added the conversion.”
Marcus Rodrigues was responsible for the next two long touchdown runs as well. His first was 55-yards and followed that up with a 60-yarder. Burford connected with Aiden Zapata successfully for one of our 2-point conversions and then punched in the other 2-point conversion on his own. Blain Davis scored our final touchdown of the evening on a 15-yard run, with Caiden Hansen kicking the extra point to make the score 53 to 22 in our favor.”
Other contributing offensively were Zapata and White on multiple receptions. Nick Ortiz got a crucial first down on a 50-yard reverse early in the game that set up the second touchdown.
“The offensive line was the main reason we were able to score 53 points in this competitive game,” Oropeza finished saying. “This week will get back to work in order to prepare for our next district game.”
The defense really stepped up its game after giving up three scores in the first half.
“I am really proud of this group of young men,” stated defensive coach Juan Gonzalez. “At the beginning of the year these kids did not handle adversity well. They would not respond to take back control of a game if things were not going our way. Hondo is a big game for us, and, sitting there in the end zone during halftime tied 22-22, I was not sure how they were going to come out and respond. I reassured them that we are not changing anything and that they just needed to be focused in on defense. Three interceptions and one fumble recovery later; the defense took control to help lead us to a 53-22 victory. This game showed huge growth for these young men and I could not be more proud of them.”
Caden Hanson had two of those interceptions Coach Gonzalez referred to while Jaiden Burford had the other. Aiden Zapata had the second half fumble recovery.
Up next
Devine plays at Warhorse Stadium Thursday night against Crystal City. Kickoff is set for 5:00pm.
By Jerel Beaty
Staff Writer