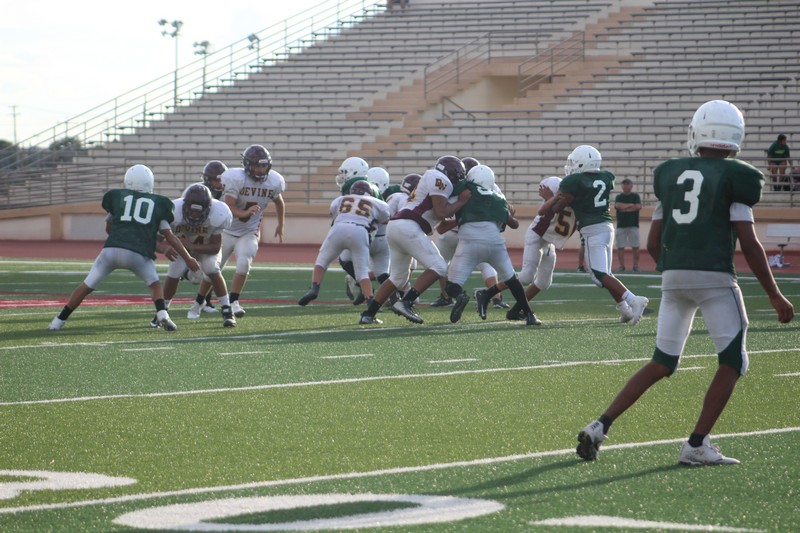 Thursday September 6th the freshman Warhorses faced off against the Somerset Bulldogs for their first home game of the young season. The game did not pan out in the home team’s favor as Somerset pulled away for the 44-20 win. Devine’s record drops to 1-1.
Although the Bulldogs got on the board first, the offense quickly responded to make the game 6 to 6 early in the second quarter.
“The first touchdown was a result of good blocking by the offensive line,” stated Coach Bart Oropeza. “We added a 70-yard rushing touchdown by quarterback Brady Hackebeil later in the game but it just wasn’t enough.”
Hackebeil went on to rush for an additional score and a two-point conversion. Other that carried the ball tough for Devine were Zack Nowicki, Xavier Contreras, and Gus Puente.
“We too many mistakes that ended up costing us the game against the Bulldogs. Our goal for this week is to fix some things on both sides of the ball and to tweak our special teams in order to put us in a better position come out with a win against San Antonio Legacy,” Oropeza finished saying.
Up next
Devine travels to San Antonio Southwest Legacy to take on the Titans Thursday, September 13 at 5:00pm. It will be played as a JV B game.
By Jerel Beaty
Staff Writer