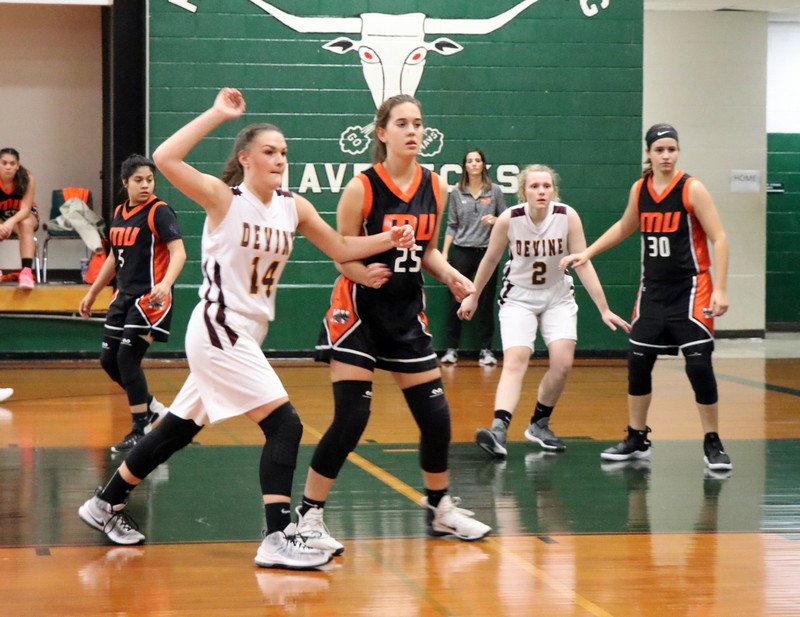 The Freshman Arabians opened the second half of their season with three well earned wins in the Bracken Christian tournament December 27th and 28th. Coach Mark Mangold and his young team had to work hard for their wins and remain undefeated this season.
In the opening game against LaVernia, the Arabians “jumped out to an early 10 point 1stperiod lead and stretched that number to 18 at the half. LaVernia came out in the second half with a full court press and the young Arabians broke the press for some easy baskets,” said Coach Mangold. Devine tried slowing the game down in the 4th but LaVernia continued to press and the Arabians showed that they were still in control of the game with a 58-27 win.
Yesika Garza led all scorers with 18 points, Kendall Marek 16, Lacey Shook and Cecilia Martinez 8 each, and Emily Cruz and Cecilia Martinez with 4 each.
“The last game of a very long day we knew we had our hands full with a very good team from First Baptist Academy. The score went back and forth all game, both teams played with a lot of heart and emotion. In the end, emotions would be the downfall for the young ladies from First Baptist. The Arabian intensity caused turnovers and frustrated the Eagles. We made them pay for their mistakes simply by making 11 out of 14 of our free throws in the final period. I was proud of our team and our fans for celebrating the victory and how well we played and not getting caught up in the after game antics,” said Coach Mangold.
Devine won their second game 41-31. Cecilia Martinez scored 17 points, Yessika Garza 12, Kendall Marek 7, and Lacey Shook 5.
Facing the San Marcos JV team for the championship, the freshman knew they were in for a fight. San Marcos was a fast and tall team but Devine knew they needed to make every shot count. “Shooting the ball very well, we rang up 16 points in the first period and we were going to need every point. Kendall Marek would have her hands full guarding a very athletic 6 footer. When the dust cleared, Marek outscored her counterpart and put her in foul trouble too,” said Coach Mangold.
Letting their excitement and nerves get to them in the second, San Marcos was able to keep pace and it came down to the wire at the end. “Devine owned a two point lead with about 5 seconds left in the game. Lacy Shook could ice the game from the line just like Yessika Garza and Cecilia Martinez did against First Baptist,” stated Coach Mangold.
The Arabians won 43-39 and Lacy Shook was named Tournament MVP!
Freshmen head to district
Heading into district with an undefeated record, the Freshman Arabians have a target on their back and everyone is looking to beat this team. In their first district game against Hondo, the Arabians were full of energy and ready for another win 45-25
“Game on as we settled into a zone offense, the Owls jumped into a full court press, but after two quick scores, we no longer saw a press. We settled into a zone offense the rest of the night. Trying to find a crack in the defense was difficult early on but when it appeared, we exploited it. Drives, dives, help defense and great vision were all a part of the second half as the Arabians went on to defeat the Lady Owls for their first district win,” said Coach Mangold.
Highlights from the game from Mangold were: Yesika Garza had another great night with a double-digit game scoring 17 points. Lacy Shook kept making incredible pass after pass and was relentless on defense. Kendall Marek also made great passes, scored, grabbed rebounds and ran the court. Cecilia Martinez battled for every ball and has a knack for being in the right place at the right time.
Yesika Garza led all scorers with 17 points, Cecilia Martinez 9, Kendall Marek 6, Kaydi Yeats 5, Mayah Brogden 4, Lacey Shook 3, and Emily Cruz 1.
The Freshman Arabians are undefeated with a 13-0 overall record and 1-0 in district.
By Dicy Chambers
Sports Writer