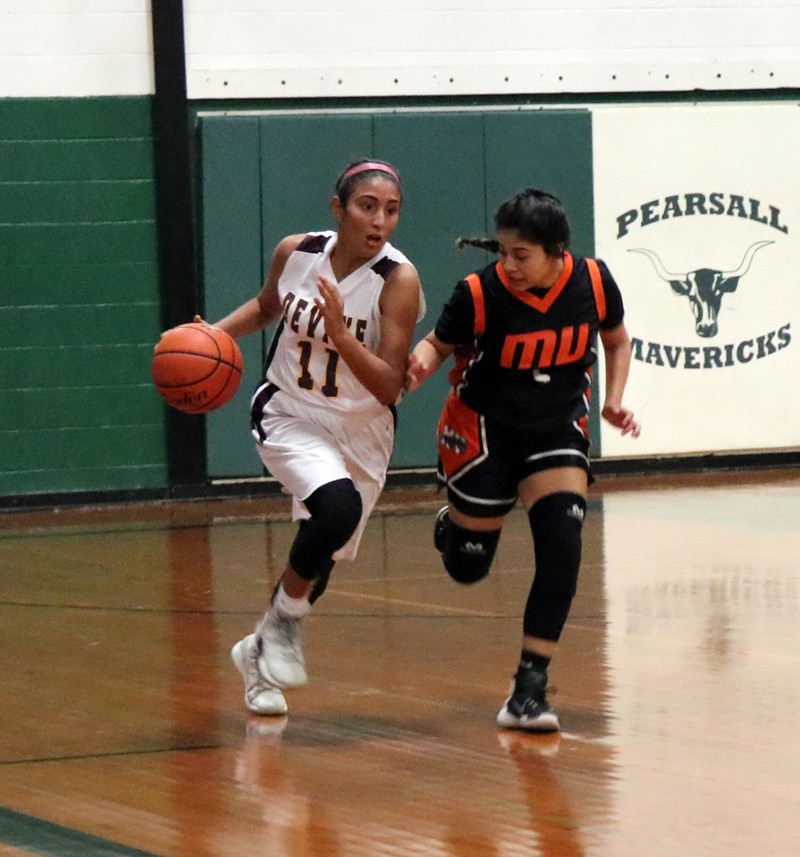 Have not played a game since November 27, the Freshman Arabians had some dust to work off against Boerne. They went back and forth making baskets with the Greyhounds until “Midway through the first period we shook off the rust, turned on the lights and never looked back. We owned every period and outscored our opponents by an average of 6.25 points. Defense was intense all game as we created steals and fast breaks, grabbed rebounds and loose balls, and kept our heads about us during a very physical game.” Coach Mark Mangold
The Freshman Arabians won 49-24 and Cecilia Garza has come back into the lineup. Lacey Shook lead with 14 points, Cecilia Garza 11, Yesika Garza 11, Kendall Marek 6, Mayah Brogden 4, and Kaydi Yeats 3 points. As of this game, the Arabians are 8-0.
Cotulla
In Cotulla on December 18th, the Freshman Arabians won their ninth straight game this season without a loss. Coach Mark Mangold has worked his team hard in practice to get them to this point and that hard work has paid off. In the 45-3 victory, the Arabians broke the Cowgirls man to man and zone defenses.
“Still excited from the Boerne win we once again owned the floor. The Cowgirls started in a man-to-man defense and that didn’t stop us. They quickly went to a zone defense and that didn’t stop us. They pressured the ball and that didn’t stop us. They put us on the free throw line and that didn’t stop us. If you put all that together, I figure you could conclude that tonight we were unstoppable. This was a good opportunity to move the ball, work on our plays dictate the pace of the game and get better as a team and we did a great job of doing just that.” Coach Mangold
Yesika Garza scored 13 points, Kendall Marek 10, Lacey Shook 8, Cecilia Garza 8, Emily Cruz 4, and Mayah Brogden 2 points. The Arabians will compete in the Bracken Christian Tournament January 27-28th.
By Dicy Chambers
Sports Writer