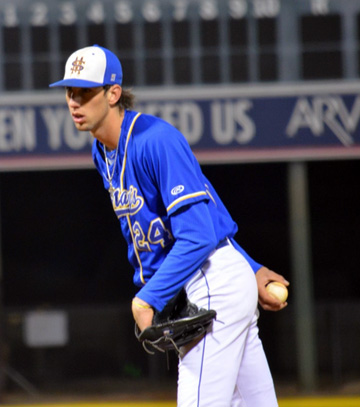 Former Devine Warhorse multi-sport standout and current St. Mary’s Rattler baseball player Connor Schmidt pitched his way to earning his first Lone Star Conference Pitcher of the Week honors after his standout performance Sunday, February 21 against the Lubbock Christian Chaparrals.
In seven innings on the hill, Schmidt struck out six while giving up only three hits and one earned run. Sixty-two percent of the pitches delivered by Schmidt were strikes as 56 of 91 nailed the strike zone.
The Chaps batted a measly .130 against the 6’7”, 190-pound right-hander.
The day after learning of the LSC Pitcher of the Week Award, Schmidt was named National Collegiate Baseball Writers Association South Central Region Pitcher of the Week.
With this honor, Schmidt is now on the short list of players who will be listed on the ballot for National Player of the Year that is voted on at the end of the season.
According to the Rattler’s website, Schmidt is the first recipient of the regional weekly honor for its university since former Somerset standout Donnie Perez received the honor in February of 2018. Schmidt is the 22nd player overall to win the award for St. Mary’s University.
Currently in his junior season with St. Mary, Schmidt is 3-1 with 19 innings pitched and 16 strikeouts.
Connor is the son of Gary and Pam Schmidt and has one sister, Alyssa.
The skinny
During his time as a Warhorse athlete, Schmidt was affectionately known as “Skinny” by coaches and teammates alike as the then 6’6”, lanky kid weighed somewhere in the neighborhood of the 155-to-160 pound range.
However, when it comes to his current weight, St. Mary’s may want to update Skinny’s profile page soon as he has not only grown at least another inch or so to hit 6’7”, but has beefed up to 190 pounds, give or take a meal or two.
In a day and time where many high school athletes for various reasons choose to participate in only one sport, Skinny was a multi-sport beast for the Warhorses while playing football, basketball, and baseball.
Excelling in multiple high school sports, being a valued member of FFA, and achieving National Honor Society status, Skinny’s heart and soul has always been with baseball.
His love of baseball was apparent at a young age and even well into his high school career even when offers to play other collegiate sports were probably on the table.
Skinny never seemed to let things bother him while he was toeing the rubber for the Warhorses. A teammate’s error, a passed ball, or a failed tag never got Skinny down.
He was always ready to throw the next pitch, and it was usually a dandy.
A common joke among all coaches from every level of play is that the better players a coach has, the better coach that coach is.
If that saying is true, Skinny made Warhorse baseball head coach George Villa a darned good coach in while he donned the #1 maroon and gold jersey.
Skinny regularly posted double-digit strikeouts in while in high school. On strikeouts, the ball is not put into play. If the ball is not put into play, no fielding errors can occur and no batter has a chance to reach a bag or eventually score.
Schmidt cut down the number of runs potentially allowed by not only being a fantastic pitcher, but he was an even better competitor which he learned through participating in multiple sports, for multiple coaches, over a long period of time.
Villa proudly said, “It feels really good to see a former player continue his success at the next level. I always knew this kid was destined for greatness. Stay tuned because as long as he stays the course and stays healthy, you’ll be hearing a lot more of him.”
Congratulations, Connor!
By Jerel Beaty
Staff Writer