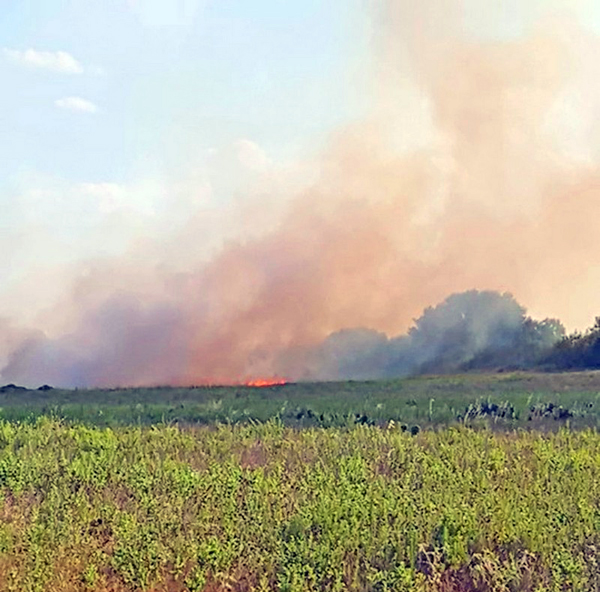 Over 30 volunteer firefighters fought an aggressive fire that claimed an estimated 125 acres in Bigfoot Sunday evening, August 11. The fire, which threatened the homes of at least nine families, is the biggest fire that area departments have seen in many years. The fire broke out between CR 2750 and CR 2814 area on side roads off of FM 462 around 5:18 pm. First responders were out there battling the blaze for about six hours.
“We had a lot of support from area fire departments and community members too,” said Chief Mark Leach. “With so many houses nearby–it could have been really bad. If we didn’t have so many departments come out and help–kit would have taken out several homes. The wind kept changing directions, and that made it difficult to stay ahead of it.”

“It came within 50 feet of at least three of those homes,” added Lieutenant Denise Woody. “It was a little dicey at times. That deep clay sand made it hard for the fire trucks to maneuver, and we had at least two tractors out there helping to pull fire trucks that had gotten stuck at least a half dozen times. As the evening went on, the wind picked up as well, kicking the fire into the big Oaks. It was like a stair step, climbing from the heavy grass to the mesquite brush to the big Oak Trees. So it was going up, but it was also going down underneath the heavy grass into several layers of dead grass below it. So as you put out the fresh green grass, it was still smoldering underneath.”
Neighbors were also out there with garden hoses, shovels, and rakes, and one of the neighbors was even mowing the tall grass to help out.
“People dropped off cases of water, and somebody actually brought several packs of electrolyte popsicles to help out, and the guys really loved that. They were nice and cool and really helped everyone perk up,” Lieutenant Woody said. “We had been assisting Moore with a different call earlier that day when we got dispatched for this fire, and I remember my truck said it was 104 at that time.”

It was close to 8 pm before volunteer firemen had about half of the fire contained.
“It was a really aggressive fire,” Chief Leach adds. “Thankfully with everyone’s help we were able to protect all of the homes and save most of the big Oak trees as well. We finally cleared the scene around 11:15 that night. Seeing a fire like that moving toward your house, it’s a wakeup call. Please do not burn right now. We believe this 125-acre was started by someone who was burning trash in their back yard.”
Three new volunteers have joined the Bigfoot VFD team lately, and they are always hoping more neighbors will step up to the plate. There are so many things you can help area volunteer fire departments with–anything from fighting fires, rescuing people trapped inside vehicles to simply brining some electrolyte popsicles (such as PediaLite) or water to crews during big fires.
Devine VFD, Natalia VFD, Moore VFD, Pearsall VFD all assisted Bigfoot VFD in fighting this fire. The Devine News would like to thank all volunteer firemen who do so much for our community, dedicating so many hours to respond in our times of crisis!! You truly are heroes.
Volunteer or donate POPCICLES, water, Gatorade
Call Bigfoot Chief Mark Leach to volunteer at 210-213-0554. Drop by to donate water or ELECTROLYTE POPCICLES for volunteer firemen at the station located at 13988 FM 472 in Bigfoot. They hold their meetings on Thursday at 7pm.
To volunteer at the Devine Volunteer Fire Department, call (830) 665-4246. The station #2 is located at 1419 CR 5710 in Devine, and they meet on Thursday nights from 7 until 9pm.