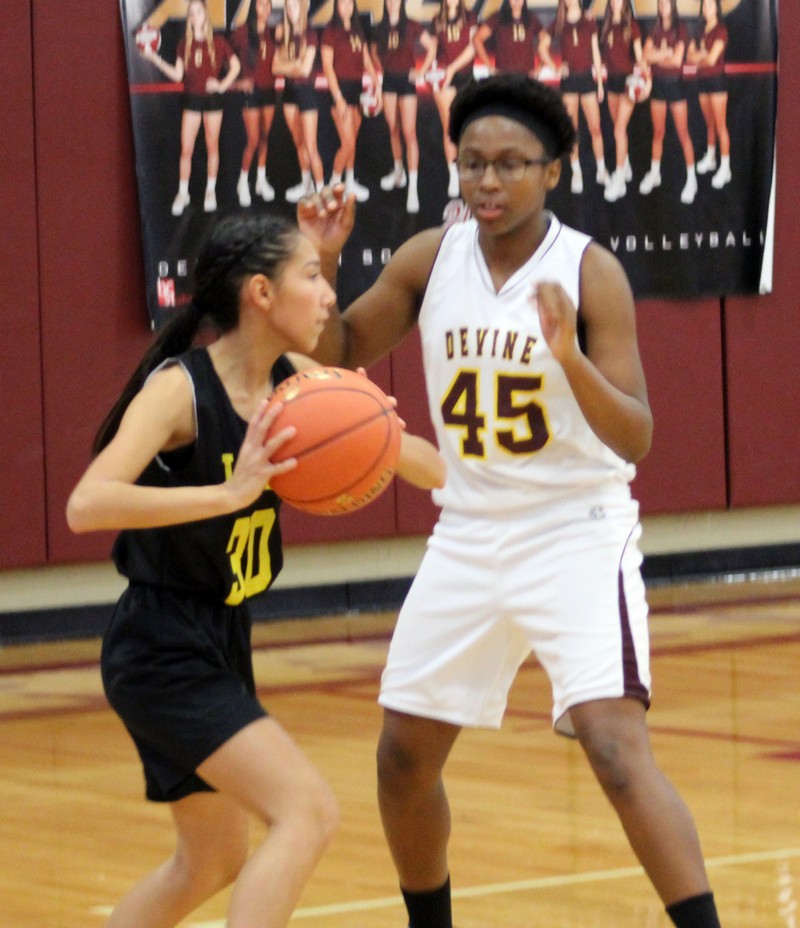 Gold Fillys
In their last game before winter break, the 8th Grade Gold Fillys beat the Lady Aggies 28-20. “The Fillies were down early, but were able to adjust and lead 14-6 at the half. With improved defense in the second half, the Fillys were able to take the victory.” Coach Julie Oropeza
Barbara Merlo had 1 steal. Nayeli Saldana 2 points, 1 rebound, and a steal. Danelly Rodriguez 1 steal. Ebany Garcia 8 points, 5 rebounds, 4 steals, and an assist. Emily Stotts 2 rebounds and a steal. Amber DuBose 2 points, 3 rebounds, 3 steals, 2 assists, and a block. Madison Cumpion 10 points, 5 rebounds, 3 steals, and an assist. Elena Meeks 1 rebound. Cassandra Elias 3 steals and an assist. Allison Dugosh 4 points, 4 rebounds, 2 steals, and an assist.
The Fillys will play again on January 19th in Crystal City with games starting at 4:30.
Maroon Fillys
In their second meeting this season, the 8th Grade Maroon Fillys beat Poteet an aggressive game and caused a lot of Poteet turn overs. They previously lost to the Lady Aggies in their very first game this season. They went into that game with almost no practice and lost a very tight game.
“With a lot of nervous energy, the Fillys started the game slowly giving Poteet an early 0-6 lead. After settling down and regaining their composure, the Fillys evened the score out by the end of the first quarter 6-6. Devine busted the game open with a 19 point 2nd quarter while holding Poteet to 6 points. At the half, the score was 25-12 in favor of the Fillys. The Fillys tightened up the defense and kept the offense rolling for a 46-28 victory in the end. Our girls are blessed with speed, and that really helps us create problems for the other team.” Coach Julie Oropeza
Neenah Guerrero had 2 points, 1 rebound, 3 steals, and 2 assists. Bailey Oropeza 4 points, 4 rebounds, 3 steals, 3 assists, and a block. Angelina Rios 6 points, 1 rebound, 2 steal, and 1 assist. Rebecca Mares 1 steal and 1 assist. Jordan Erxleben 2 rebounds, 1 steal, and 1 assist. Andrea Rios 4 points, 2 rebounds, 2 steals, and 1 assist. Cameron Hutton 13 points, 4 rebounds, 5 steals, 1 assist, and a block. Korynn Arche 3 rebounds, 1 steal, and 1 assist. Joselyn Guajardo 1 rebound and 1 steal. Tahtiana Gilbert 16 points, 6 rebounds, 4 steals, 4 assists, and a block
By Dicy Chambers
Sports Writer