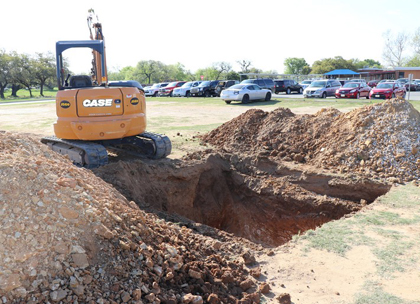 No motion was made on personnel or student or property after an hour long closed session during the called meeting last Tuesday night March 12 of the Board of Trustees of Devine ISD. All three categories were listed as possible closed session items as listed below. Therefore it was apparent that the school district would not be looking to bid on the purchase the old TXDOT 5 acre property across from the high school. This left only one bidder, Medina County in the race for the purchase of that property.

Elementary Sewage Project
A failed wall in a sewer septic tank at the elementary school has caused the district a lot of problems lately. DISD is working to fix it and taking bids on the sewage project with a April 15 bid opening.
“We are currently pumping (the septic tank) out daily at 4:00 p.m. , not every other day as previous thought we would be able to”, said Darren M. Van Fossen, Devine ISD, Director of Operations and Custodial Services.
“We had hoped to do alot of work during spring break but the first bids came in over our $75,000 cap that was approved by the board. After doing the math, using 14 joints of pipe, $20,000 materials, a man hole, and $8,200 for the tap into the new sewer main behind the elementary, I think we can save $20,000-$22,000 if we would go out for competitive bids. Even with a cost of $1,750 a week to pump out the septic another month or so I feel like we can save $20,000 to $22,000 if we go out for competitive bids”, said Van Fossen.
The school board voted to go out for bids on the sewage project.
The new connection would be at the end of the head start building near the soccer fields, an 8 foot deep hole has already been dug and the green/blue eight inch main can be seen in the huge hole which is barricaded with orange fencing. A new 7 foot manhole with concrete rings and blocks are sitting near it awaiting installation.
The old septic tank and lines are located across the road near the fire hydrant and the grass area where parents park when the pickup kiddos at the elementary. The old lines would be capped off and abandoned once the new ones are in place it sounds. The area is surrounded with mounds of dirt and an orange fence with caution signs. Clean out pipes were installed for the daily pumping. 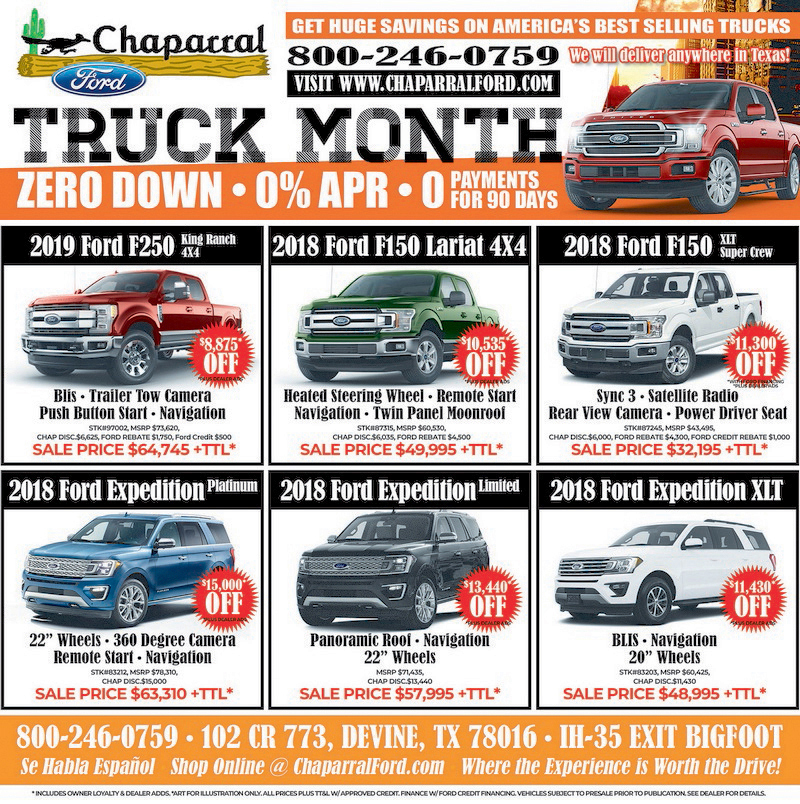 At the February meeting it was discussed and the following background information was given: “Ongoing plumbing issue at the Elementary that initial repair could not be completed due to integrity of the existing pipe. Temporary repair to allow use of restrooms in the 1st grade wing and portable buildings. Since the repair could not be completed we will have to run a new line which will require excavation of part of the parking lot at the Elementary. We have not been able to coordinate all parties involved in this project but would like to proceed to have the job completed during spring break. We do not anticipate the cost to be over $50,000.00 but are requesting board approval in the event there is an unforeseen problem. The board approved: The Superintendent shall recommend the project delivery/contract award method that he or she determines provides the best value to the District with the use of Fund Balance. They authorized the Superintendent to contract for Elementary Sewer Project not to exceed $75,000.
4. Closed Session
Items listed on the agenda under closed session included the following:
A. Personnel Update (TGC 551.074)
B. Consider and discuss the evaluation or discipline of an employee or teacher (TGC 551.074)
C. Consider and discuss the purchase, exchange, lease or value of real property (TGC 551.072)
D. Considering discipline of a public school child, or complaint or charge against personnel (TGC 551.082)
Texas Government Code Section:
551.072 Discussing purchase, exchange, lease or value of real property.
551.074 Discussing personnel or to hear complaints against personnel.
551.082 Considering discipline of a public school child, or complaint or charge against personnel.
Attendance
Board trustees in attendance at the March 12 meeting were Wes Herring, Henry Moreno, Dr. Keri James, Nancy Pepper, Phillip Fitch. Absent trustees Carl Brown and Robert Morales.
Also present was Supt. Scott Sostarich, Opertions Direcctor Darren Van Fossen
By Kathleen Calame
The Devine News Publisher 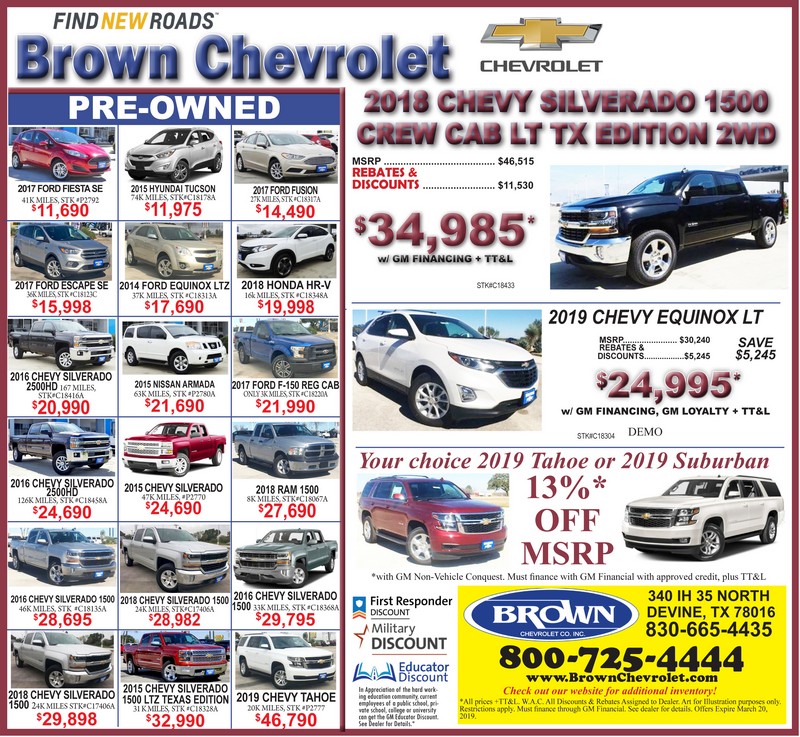