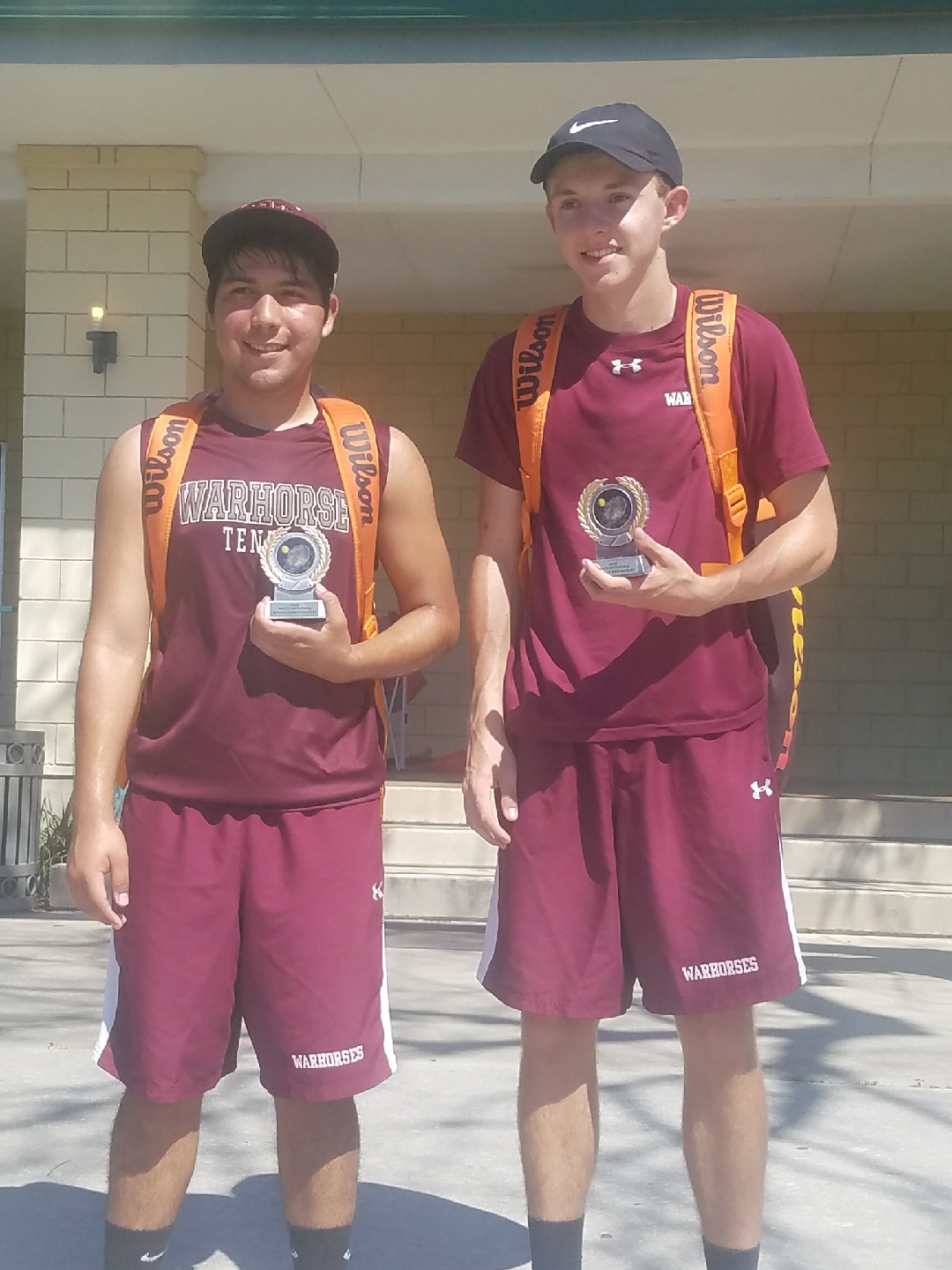 Devine Tennis Team had another successful weekend on the courts in San Antonio. Many either made it to the semi-final or final rounds of competition. Most teams were from 5A or 6A schools. Devine will be competing in the Uvalde Pre-District tournament March 23rd -24th. Their District Tournament is March 26th-27th in Uvalde.
Devine Boys Doubles team placed 2nd in a group of very competitive players. Warhorses Ralph Rios and Jake Harrell beat teams from Manvel HS, Frenship HS and Alvin HS. All three of these were competitive and intense matches. Then they lost to Frenship’s #1 duo, Lewis/Nguyen, in the championship match. Frenship HS is a very talented 6A team from Lubbock,Tx. This was the first tournament that Rios/Harrell had played in together, so we are excited to see how they will compete the remainder of the season. Warhorses Mason Zenon and Jacob Barron also played doubles. They lost their first match against CC Moody and then won several matches before losing in the semi-finals of consolation. This too was their first time to play together this season.
Caeden Alvarez was our loan boy singles player of the tournament. He lost to E. Solis of Jefferson HS, then lost to M. Grimm of Lockhart HS.
Arabian singles player Brooke Runyan won two quick matches against Centennial HS and SA Veterans. Runyan then split sets and beat L.Brown of Frenship HS, in a tie breaker, in a long quarter finals match. Saturday morning Brooke faced a very talented young lady from Shadow Creek HS in the semi-finals. L.Sylemanji beat Runyan in two sets. Shadow Creek’s Sylemanji and Sherrill both played in the championship match. Arabian Lindsey Spannagel had a bye her first round, then beat B. Shotwell of Alvin HS in two sets. Unfortunately, Spannagel had a tough loss to a very talented M.Sudduth from Frenship HS.
Girls Doubles team Lydia Zapata and Malvin Flores lost their first match to Hunt/Visage of Lockhart, placing them in the consolation bracket. They won several more matches before losing to Sam Houston in the consolation finals match, giving them 2nd in the consolation bracket.
The mixed doubles teams had some very tough competition from the very first matches. Preslee Quisenberry and Toby Ramos lost their opening match to a very tough 6A Frenship team. Then they won several matches before losing in the semi-finals of the consolation bracket.
Denton Zuercher and Laurel Spannagel also played mixed doubles for Devine. They had a bye their first round, then lost to Lockhart HS. They won their next match, but then lost in the semi-finals round of the consolation bracket.