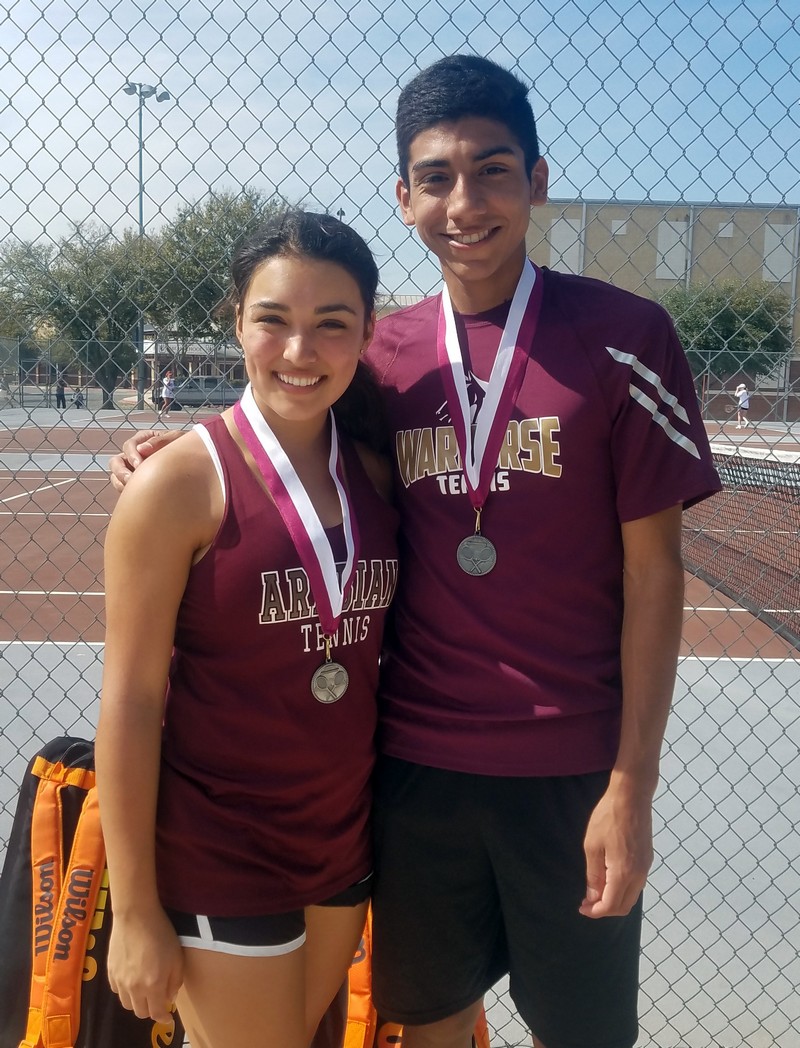 Warhorse and Arabian Duo, Toby Ramos/Scarlett Smith took 2nd place in the #1 Mixed Doubles draw. They won two quick matches losing only 9 games. In the semi-finals match, they won in a tie breaker against Warren 2-6, 7-6 (4), 10-3. Del Rio then beat Smith/Ramos 6-5, 6-1 in the finals match. #2 Mixed Doubles team Jacob Barron/Madi Mohr won their first match to Uvalde 6-0, 6-0, then lost to a tough Warren team. Barron/Mohr were able to win the next match against Eagle Pass only to lose their next match giving them 6th place.
Arabian Bella Elias won 3rd place in #1 Girls Singles. Elias won three quick matches before losing her semi-finals match to a scrappy E. Cannon of Warren HS, 3-6, 0-6. She then beat D. Jenkins of Del Rio to win the 3rd place medal. Freshman Arabian, Cameron English played in the #2 Girls Singles draw. English played well and got a lot of experience. She lost two matches and won one match against Eagle Pass giving her 13th place.

Arabians #1 Doubles team Laurel Spannagel/Malvin Flores played well, getting a bye in the first round, then beating Ingram in a tie breaker of 10-7, after splitting sets, 7-5, 3-6. In the semi-finals they beat Del Rio 6-0, 6-0. Warren came out on top 6-0, 6-1 in the championship match so they had to settle for 2nd place. Arabians #2 Doubles team JoJo Villanueva/Caitlyn Breiten beat teams from Carrizo Springs and Uvalde putting them in the semi-finals match of the #2 Girls Doubles draw where they had their first loss against Ingram. They lost to Hondo in the 3rd place match 3-6, 1-6.

Warhorse #2 Doubles team Mason Zenon/Caeden Alvarez won their first two matches only losing one game. In the semi-finals match they won a close one against Ingram. Warren then beat Alvarez/Zenon 6-3, 6-3 in the finals, giving them 2nd place.
Denton Zuercher and Aidan Hildenbrand played singles for the Warhorses. Both players did well considering they have been playing doubles so far this season. Zuercher won his first match against Bandera then lost to Warren and Uvalde. Zuercher got 7th place. Freshman Aidan Hildenbrand played well and got a lot of experience. “Very proud of these two guys for taking on the singles game,” said Coach Melanie Sostarich.
“Looking forward to next week back at Uvalde. The team is playing well, improving every week,” said Coach Sostarich.